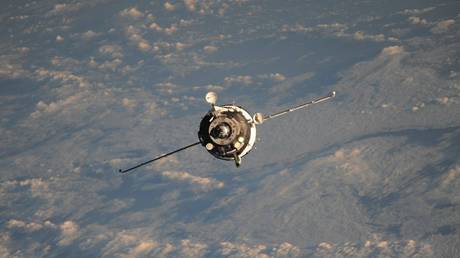 A technical glitch postponed a long-awaited rendezvous of International Space Station with a Soyuz mission, but the canceled approach didn’t put Fedor, a humanoid robot aboard the Russian craft, in harm’s way, Roscosmos said.

An unmanned Soyuz MS-14, carrying supplies and the anthropomorphic robot Skybot F-850 –otherwise known as Fedor– failed to dock with the International Space Station (ISS) this Saturday. The capsule was on its final approach when cosmonauts suddenly sent an abort command from the station, which led to the Soyuz craft being guided away to a safe distance.

The MS-14 is the first Russian ferry spacecraft to bring a humanoid robot into orbit, and the aborted docking naturally made headlines in local and international media. Shortly after the news broke, the space agency assured the public that no one was harmed in the incident.

The Skybot, who turns out to be the only ‘crew member’ on the Soyuz, “is calm and awaits the docking,” Roscosmos commented. “At no point was the crew in any danger,” NASA spokesperson Rob Navias added during live commentary.

The spacecraft is currently staying afar from the ISS, the docking is scheduled for the reserve date. The crew and the ISS are safe. pic.twitter.com/WWZFgYnX8E

Roscosmos engineers believed that that a faulty rendezvous system, known as Kurs, was to blame for the failure. The system aligns an approaching craft with the station and performs an automated docking. If it fails on a Soyuz, its crew can take the controls and dock manually, which was done several times in the past.

But this time, there was no one on board except for Fedor, who wasn’t able to ‘man’ the capsule on his own. Still, sensors on the robot’s body are measuring key parameters such as acceleration, vibrations, temperature and humidity. “He feels good,” a Roscosmos’ spokesperson reported later in the day. (RT)

The United States and Japan have flown nationals out of China’s coronavirus epicentre, as the…