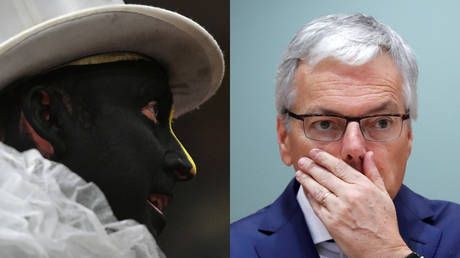 Wearing blackface regardless of time and context is definitely one of the deadly sins in cancel culture scripture. So should this politician slated for the EU Commission brace himself for a mob with virtual torches and pitchforks?

Didier Reynders was recently nominated EU Commissioner for Justice after a long and storied career in Belgium. Currently both the foreign affairs and defense minister under Belgian PM Charles Michel, Reynders has held a post in government continuously since 1998.

But he may prefer to forget one not so distant episode in his lengthy public service career now that he is going international. In 2015, the minister donned blackface paint for the annual gathering of a philanthropic group known as the “Noirauds” (“Blacks,” roughly), who help to raise funds for disadvantaged children. While few took issue with the group’s goals, the festive costumes of its members – tail coats, top hats, ruffled collars, and blackface – was another story.

The new EU Commission might not be “elected” but at least it’s gender-balanced and diverse!

Here’s Belgium’s Didier Reynders who’ll be in charge of the EU budget: pic.twitter.com/57z76oMO7O

The attire did draw some criticism when Reynders wore it. European media director for Human Rights Watch, Andrew Stroehlein, assailed Reynders for participating in the festival, calling it “shocking and embarrassing,” and mused whether Reynders ought to lose his post in government.

Does this make his position as Foreign Minister untenable? Surely some counterparts abroad will refuse to meet with him after this, no?

Wouter Van Bellingen, a Belgian politician who then headed up the country’s Minorities Forum, said the move was “inappropriate” and showed Reynders’ “total lack of empathy for people of color.”

The politician not only survived the controversy but was rewarded with the defense portfolio in December 2018, and now with the nomination for EU Justice Commissioner, in charge of the rule of law and consumer protection.

This was probably not that surprising. Europeans’ sensibilities about blackface are not as acute as those in America, and four years ago woke outrage wasn’t the career killer it is now. Even now some of its victims sink like comedian and actress Sarah Silverman and some swim like Virginia Governor Ralph Northam. (RT)