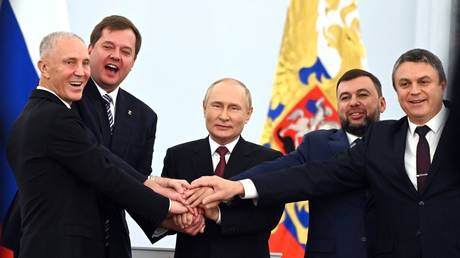 RT recalls the chain of events that led to Kiev’s loss of sovereignty over a significant part of its territory Vladimir Saldo, Yevgeny Balitsky, Denis Pushilin, Leonid Pasechnik and Russian President Vladimir Putin react during a ceremony held for ‘accession’ of Ukraineâs 4 regions to Russia, in Moscow, Russia on September 30, 2022. © Kremlin Press Office / Handout / Anadolu Agency via Getty Images

Russian President Vladimir Putin has signed documents paving the way for the formal acceptance by the Russian Federation of the Donetsk and Lugansk People’s Republics as well as Kherson and Zaporozhye Regions. The treaties await ratification by the Russian Parliament.

According to Moscow, Friday’s decision followed a democratic vote, in which people living in the former regions of Ukraine exercised their right to self-determination and requested Moscow’s protection from Kiev.

The historic move was condemned and rejected by Kiev and its foreign backers, which described the move as annexation of sovereign Ukrainian territory.

RT takes a look back at how an armed coup in Kiev eight years ago led to a change of European borders amid a major armed conflict.

In late 2013, a wave of street protest began in Kiev, ostensibly sparked by the government of Viktor Yanukovich shunning an economic agreement with the EU – a deal sold to Ukrainians as a harbinger of immediate social and economic benefits. 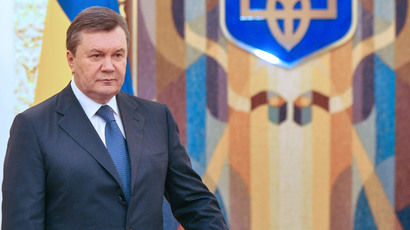 As weeks of determined protest stretched into months, the so-called Maidan demonstrations were hijacked by radical nationalists, resulting in violent clashes with security forces in which dozens died. International politicians lent their support to the protests, with senior US diplomats famously handing out cookies in central Kiev. The emboldened movement gathered momentum and, despite a power-sharing deal mediated in February 2014 by Russia, Germany, France and Poland, escalating violence forced then-President Viktor Yanukovich to flee.
The US-backed coup in the capital rallied the radical forces, who resorted to openly threatening the pro-Russian population in Ukraine with violence if they dared oppose the newly-installed authorities in Kiev.

The Crimean Peninsula had strong historic ties with Russia, having been transferred to Kiev’s control only in 1954 under Soviet leader Nikita Krushchev. The region is essential for Russia’s national security as its deep harbours host the Black Sea naval Fleet.

In a daring operation that was thought to have eventually prevented significant bloodshed, Moscow deployed special forces across the peninsula, and local authorities held a referendum on breaking with Ukraine and joining Russia. Moscow formally accepted Crimea’s bid in March 2014. 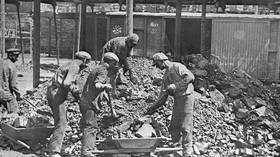 The situation with two Donbass regions developed differently. In mid-April 2014, Kiev sent the military to quash protests in Donetsk and Lugansk. Protesters responded by forming militias and fighting back, militarising an already inflamed conflict. The following month, the two regions held referendums on declaring their independence.

The conflict in eastern Ukraine sank into a stalemate after the Ukrainian military suffered serious losses to what Kiev claimed were Russian troops secretly fighting in Donbass. The warring parties agreed to a ceasefire and a reconciliation roadmap, formalized in two agreements signed in Minsk in 2014 and 2015 respectively, was agreed to.

The peace plan never fully worked. While hostilities in Donbass dwindled, Kiev refused to meet its responsibilities, particularly on the question of federalization, unless its troops were given control of the Donbass regions’ borders with Russia. This ran contrary to the terms of the Minsk agreements. Former Ukrainian President Pyotr Poroshenko acknowledged in June that he agreed to the ceasefire only to win time to rebuild the Ukrainian military.

The tension over Ukraine escalated in 2021, after Russia accused NATO of expanding into the country without formally admitting Kiev into the alliance. Moscow had for decades made clear that Ukraine’s would-be membership in the US-led bloc would be crossing Russia’s security red line.

Moscow sought guarantees from Washington that would have addressed its concerns. However, US officials declared that NATO’s “open door” policy meant that Ukraine was free to defend itself as it wished. Kiev enshrined the goal of becoming a member of the military bloc in its constitution in 2019.

Since then NATO members have intensively trained Ukrainian troops, providing Kiev with weapons and otherwise helping to field a more capable army.

Over the same period, Ukrainian neo-Nazi groups became embedded into military structures, gaining political power well beyond their levels public support, given the results of elections held in 2019 and 2020.

On February 22, Russia formally recognized the Donetsk and Lugansk People’s Republics as sovereign states and demanded that Kiev pull back its troops beyond their claimed borders. Ukraine refused, and two days later, Russia sent its troops into Ukraine, supported by the Donbass militias. Moscow has since claimed recovering military documents indicating that Kiev was preparing its own offensive against Donbass, which was preempted by the Russian attack.

In the initial Russian push, Kiev lost control over a large chunk of its territory in the south and east, though in the months since it has managed to retake some of the lost territory. Moscow and Kiev were also engaged in a series of peace talks in the first weeks of the conflict. A negotiated agreement securing Ukraine’s neutral status seemed to be in sight, but the talks collapsed in April.

Kiev now declares that it will only deal with Moscow after ousting it from all the lands it considers under its sovereignty, including Crimea. The US declared a strategic defeat of Russia as its goal and pledged to provide aid to Kiev “for as long as it takes”.