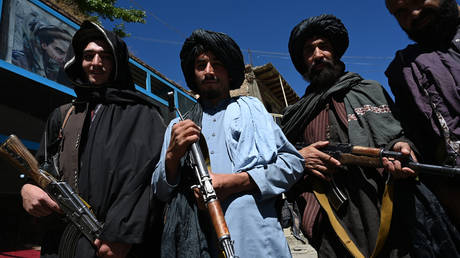 When history speeds up, it plays havoc with our sense of time. It may seem longer, but it has only been around a month since the world was shaken by a geopolitical earthquake, with its epicenter in the Afghan capital of Kabul.

The lasting effects of the Taliban’s rapid re-conquest of Afghanistan, ending with their seizure of the city in the middle of August, are still unfolding. What comes next for the country, and for its place in the world, is still to be decided.

One piece of wishful thinking already debunked by the facts is the idea that, after 20 years of war, the Taliban 2.0 is more liberal and less inclined to brutality than it was when its predecessors ruled Afghanistan between 1996 and 2001. Cunningly, the group has tried to foster this illusion of moderation. Yet the militants’ actions speak louder than words. In reality, they have installed a government that reveals the lie behind their promises of inclusivity.

The new cabinet is made up of Taliban fighters, entirely male, and has almost no members from the country’s many ethnic minorities. It also features leading cadres of the especially brutal Haqqani network. With about half of its members on UN sanctions lists, the new government may still be officially an interim administration, but let’s not be naïve about its position. It is as if Afghanistan’s incoming rulers have hung out a large sign, saying in big, bold letters: “WE won the war, and we don’t give a damn what the losers think.”

Unsurprisingly, the Taliban is also backtracking on promises to let remaining American citizens and residents leave and abstain from retaliation against those they suspect of having worked or fought for the old regime and its foreign sponsors, as Michelle Bachelet, the UN High Commissioner for Human Rights has warned.

Also on rt.com America’s evacuation of troops from Afghanistan looked more like a ‘downright escape’ than a ‘hasty withdrawal,’ Putin says

In the same unyielding spirit, officials excluded girls when reopening the country’s high-schools and turned the Women’s Affairs Ministry into the Ministry of Invitation, Guidance and Promotion of Virtue and Prevention of Vice. That is a barely renamed successor to the brutal office that used to have women whipped in the bad old days. Unsurprisingly, those who have dared protest have been beaten.

There have been rumors about ongoing conflicts between hardliners and moderates in the Taliban leadership, while the UN is still calling on the movement to establish an inclusive government. Hope dies last. But it would be extremely unwise to build policies on hope when dealing with a group as brutal, wily, and flush with victory as the Taliban.

So there it is, a bad-news double-whammy. Not only are the Taliban back for good, but they are also still the bad old Taliban. Except, of course, that they now have been emboldened by defeating the West, led by the US, as an expert from neighboring – and very concerned – Tajikistan has pointed out. Think of the new Taliban, if you will, as still extremely unpleasant but also, unfortunately, supremely motivated men.

Meanwhile, their country is on the brink of total collapse. One reason for this is that money has dried up dramatically. Under Western tutelage, up to 80% of the state’s budget depended on international support of some sort or another. A whopping 42% of the country’s GDP consisted of international aid, while dollars were flown in daily – literally, in stacks, on pallets – to inject hard currency needed for cross-border trade as well as, of course, corruption and personal enrichment.

Formally, these greenbacks may have belonged to the Central Bank of Afghanistan. In reality, the bank is still there, if, as everything else, under Taliban control, but it has lost access to funds that now remain where they have always come from: with the US taxpayer.

Also on rt.com Ex-Soviet states set to beef up joint military missions on Afghan border to head off risk of instability after US Kabul withdrawal

And that is typical. In general, whether assets officially owned by Afghan institutions or various forms of credit or assistance by outside donors, such as the IMF or World Bank, almost everything has been frozen. Funds that were scheduled to reach Afghanistan under its former regime have not, importantly, been canceled. But they have been suspended.

At the same time, Afghanistan’s population of at least 38 million people faces what UN Secretary-General António Guterres has called a looming “humanitarian catastrophe,” with 18 million Afghans already in need of assistance for bare survival. Drought and the fact that winter is coming make things worse. It may be hard to believe but for many Afghans the worst is still to come.

Against this dramatic backdrop, international discussion and even some search for responsibility have set in. Regarding the latter, don’t expect too much. Notably, though, a Dutch foreign minister has resigned over the rout in which Western forces left Afghanistan.

Obviously, the current US government under President Joe Biden, but also his predecessor Donald Trump, should consider taking similar ownership of the mistakes. Sadly, America is not good at holding its elites accountable. The hapless Secretary of State, Antony Blinken, will have to endure some more well-deserved grilling and needling; the Republicans will make hay for elections, midterm and presidential, as well as they can; a few harsh editorials about shame and complicity will make it into the mainstream media – and that will probably be it.

The American military, in any case, has made sure to warn that even the fact that it had to admit it recklessly slaughtered ten innocent civilians, including seven children, in its last drone attack in Kabul (for now, at least) makes no difference to its resolve to keep launching so-called “over-the-horizon” attacks.

Also on rt.com Putin warns terrorists & Taliban fighters ‘disguised as refugees’ could be flowing out of Afghanistan amid chaos of US withdrawal

What will keep many international leaders and their planners much busier is the question of how to deal with a Taliban-run Afghanistan. And there, we can observe two important things. One is about what many governments have in common: in essence, while nobody is arguing for simply isolating the new government, everybody is holding back on their full formal recognition. The upshot is that the international community agrees that some degree of de facto cooperation is necessary.

This minimum consensus has its real uses. For instance, at a recent conference in Geneva, cash pledges to address Afghanistan’s humanitarian crisis have exceeded expectations. While the UN was looking for just over 600 million dollars, more than 1.2 billion have been promised. How much will really come through, and how quickly is, of course, a different issue, but at least goodwill has been declared.

Yet, as so often, principal agreement does not mean much, when there are disagreements over what a policy means in practice. And that brings us to the second important feature that is emerging in the global political landscape, namely a divergence between two main approaches to Afghanistan under the Taliban. One stresses that setting what are in essence moral conditions for the Taliban might incentivize them to behave with at least some restraint abroad and at home. The other approach emphasizes the fact that, like it or not, the Taliban are now the new reality in Afghanistan. The proponents of this position also believe in conditions, but mostly concerning security and what the Taliban will do with respect to other countries, rather than at home.

It is, of course, by no means clear that a policy announcing its purported moral purposes will actually have morally better outcomes. For one thing, setting hard conditions in this area may also lead to abandoning ordinary Afghans, leaving them alone with their intractable rulers. (RT)