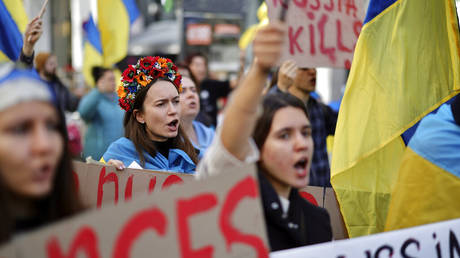 Protestors hold signs and chant during a demonstration outside of an EU summit in Brussels, Friday, Oct. 21, 2022. ©  AP Photo/Olivier Matthys

The Lviv-based lawyers promise to ‘solve the issue’ of the ‘rashist’ presence By Felix LivshitzProtestors hold signs and chant during a demonstration outside of an EU summit in Brussels, Friday, Oct. 21, 2022. © AP Photo/Olivier Matthys

Boutique Ukrainian law firm T&M has launched an appalling new service allowing residents of Western European countries to “cleanse Europe of rashists,” a reference to the derogatory neologism used by officials in Kiev, which combines the words “Russian” and “fascist.”

Titledd “give in charge rashist” (apparently a bad translation of the Ukrainian title “turn in a rashist”), the webportal invites visitors who are “tired of potential invaders living near you” to “let us know and we will try to solve this issue in the legal field.”

“We are a team of lawyers who decided to use legal methods to cleanse Europe of potential invaders,” the site explains. “No one will know who surrendered the rashist. It’s completely free. You pay nothing, but you get a bonus to karma. You are making a personal contribution to a peaceful future.”

Reporting a “possible aggressor” is said to be “easy.” Concerned citizens can easily use a form to anonymously submit the names and social media accounts of Russian citizens living in any European country, who may be “potentially dangerous” and a “carrier of propaganda and violence.” 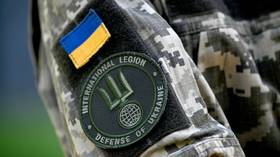 In return, the Lviv-based T&M “do everything to ensure that the relevant European authorities check the legality of such a person’s stay in Europe,” and “send a corresponding statement to the state authorities of the country in which the presence of a potentially dangerous rashist was reported.” The obvious desired end result is that the Russian in question will be arrested and deported, or perhaps even worse.

A disclaimer at the bottom of the page states the service “is not intended to incite ethnic, racial, religious or other enmity,” and only serves to bring its stated targets “to justice.”

T&M has been operating in Lviv since 2014, specializing in sports law, road traffic accidents, IT and technology transfer, and corporate relations. “Give in charge rashist” is a sub-page of T&M’s main site and links back to it in its disclaimers section.

“We do not collect your personal data in any way, and we use the personal data of rashists that you provide us exclusively for contacting state authorities,” it concludes. It is unknown if any “rashists” have been reported to authorities as a result of this abhorrent resource, or where they are located or what has happened to them if so.

This is just the latest example of how a highly hostile environment for Russians is being created abroad, in which they are, regardless of their political leanings and beliefs, viewed as one and the same. The purpose is to ensure all Russians are falsely considered “the enemy within” by local citizens in their host countries, plotting misdeeds and wrongdoing in support of the Kremlin’s devilish plans for global domination. 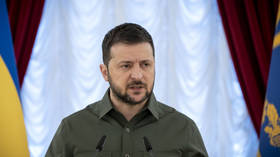 ‘Reconquest’ of Crimea has started – Zelensky

While it seems for the time being that T&M launched this resource on its own initiative, “give in charge rashist” is definitely something the Ukrainian government approves of. Ever since February 24, officials in Kiev have endlessly demanded that other European states embargo any and all things Russian.

Read more:   Azerbaijan and Ukraine: Summing up 30 years of friendship

On December 7, Culture Minister Aleksandr Tkachenko implored the West to “boycott Tchaikovsky until this war is over.” Many European countries have already cancelled or indefinitely postponed countless concerts, dance shows, and exhibitions with even the mildest connection to Russia. The letter Z itself (used as a symbol of Moscow’s military assault on Ukraine) is being so stigmatized that businesses such as banks and food delivery services have changed their logos.

While such frivolous slights, as well as T&M’s report-a-Russian initiative, might not be taken seriously by some, what is serious is that attempts to criminalize and demonize Russians have been ongoing, and have led to people being killed. In December 2014, Ukrainian politician and activist Georgy Tuka launched the hate website Mirotvorets (‘peacemaker’ in English).

Mirotvorets publishes a constantly updated list of people considered by the hidden authors of the website to be the “enemies of Ukraine,” who have said or done things that constitute “signs of crimes against the national security of Ukraine, peace, human security, and the international law.” Some individuals listed have ended up dead, and when this happens, the word ЛИКВИДИРОВАН (“liquidated” or “eliminated”) is stamped across their entry on the site in big, red letters, along with an ‘X’.

Sometimes people end up on the Mirotvorets hit list for basic administrative reasons. In September 2018, hundreds of residents of the Zakarpatye region, including government officials, who took Hungarian citizenship were added. This led to condemnations from Budapest, and denials from Kiev that it was involved in the website. 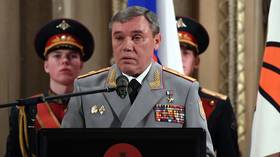 Read more:   Another batch of humanitarian aid sent to Ukraine from Azerbaijan

The next month, Hungarian Foreign Minister Peter Szijjarto angrily fired back that “it is a lie that the Ukrainian state has nothing to do with the website,” and claimed the country’s then-President Petro Poroshenko “gave his consent to the hate campaign in an attempt to increase his popularity.”

As well as average citizens, many Western figures with a high profile have ended up on Mirotvorets. This includes American journalists Chris Hedges and Glenn Greenwald, anti-war politicians Tulsi Gabbard and Rand Paul, British musician Roger Waters, and many others, such as “warmonger” Henry Kissinger. His “crime” was to worry in public that Kiev’s anti-Russian actions threatened retaliation from Moscow.

Despite the European Union, G7, United Nations and multiple rights groups calling for Mirotvorets to be closed, it has remained open. Ukrainian officials have also used the website to vet entrants into the country at border checkpoints since its launch, on top of existing government databases of undesirable elements.

While the website is managed in secret, evidence has emerged that it is closely tied to Kiev’s powerful intelligence agency, the Security Service of Ukraine (SBU), and its domain is hosted in Langley, Virginia, US, not far from the headquarters of the CIA. Which raises the question: is “give in charge rashist” an attempt by these same dark actors to take Mirotvorets global?