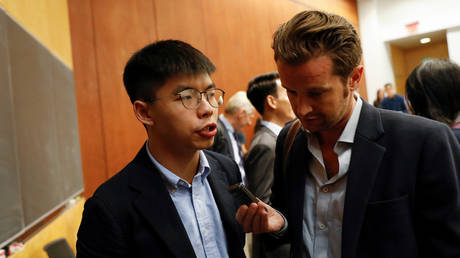 A Hong Kong protest figurehead has called on Washington to make the Hong Kong unrest a part of trade negotiations with Beijing, suggesting the US use ‘human rights’ as a bargaining chip in the stalled talks.

Joshua Wong Chi-fung, a prominent figure in the ongoing anti-Beijing protests, has been busy touring the West in a bid to persuade foreign nations to meddle in the month-long standoff. On Friday, Wong touched down in New York and wasted no time in making his case, suggesting the Trump administration should use the Hong Kong turmoil as leverage in the ongoing trade dispute with China.

Also on rt.com Hong Kong activist goes on defensive after being photographed with US consulate official

Wong argued that Washington should “add a human rights clause in the trade negotiations and put Hong Kong protests under the agenda” of the talks.

Wong has rallied behind a 2015 US bill, reintroduced by Republican Senator Marco Rubio in June, that envisages sanctions for Chinese officials responsible for “suppressing” basic freedoms. If the bill, known as the Hong Kong Human Rights and Democracy Act, is passed, the US Secretary of State would need to certify to Congress every year that Hong Kong is “sufficiently autonomous” from mainland China. (RT)