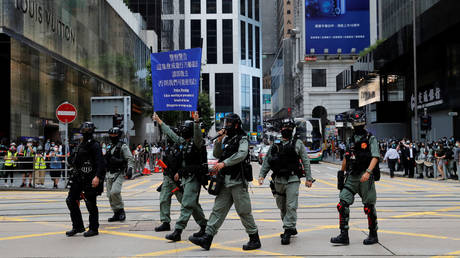 US Secretary of State Mike Pompeo has declared that Hong Kong can no longer be considered autonomous from mainland China, admitting that Washington had once hoped to use the city to change the system in Beijing, but failed.

“I certified to Congress today that Hong Kong does not continue to warrant treatment under United States laws in the same manner” as before Britain returned the city to China in 1997, Pompeo said in a statement on Wednesday.

The 1992 Hong Kong Policy Act requires Foggy Bottom to assess and certify the city’s autonomy from China, so it can continue – or not – to receive special status regarding trade and other relations with the US.

Pompeo added that the decision gives him “no pleasure,” but that “sound policy making requires a recognition of reality,” before admitting that the US aspired to use the city as a template for changing the system in the People’s Republic of China.

While the United States once hoped that free and prosperous Hong Kong would provide a model for authoritarian China, it is now clear that China is modeling Hong Kong after itself.

It was unclear whether Pompeo’s announcement was part of “something interesting…very powerful” that US President Donald Trump teased his administration might do regarding China on Tuesday.

In practice, the decision most likely means the city would lose privileged status in doing business with the US, which would actually fit better with Beijing’s plans for reintegrating Hong Kong into its constitutional order.

Months of protests shook Hong Kong last year, after Beijing proposed a law on extradition to the mainland, with protesters waving US and British flags and demanding “democracy.” Interrupted by the Covid-19 pandemic, the protests flared up again in recent weeks, now citing the new security legislation that would outlaw “treason, secession, sedition [or] subversion against the Central People’s Government.” (RT)