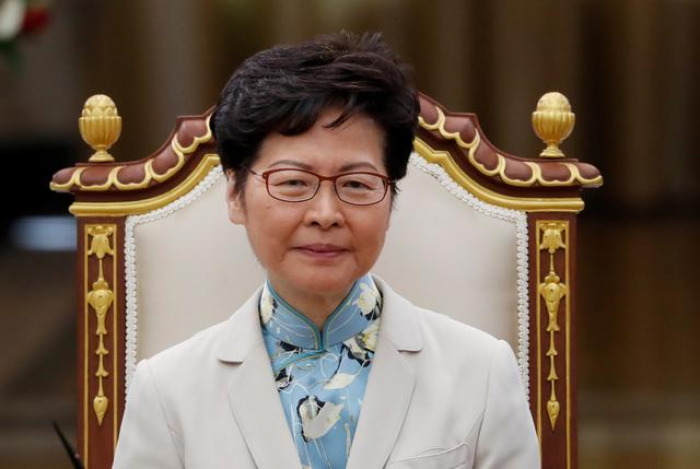 Hong Kong leader Carrie Lam on Tuesday said U.S. legislation supporting protesters may damage business confidence in the financial hub, and announced a fourth round of relief measures to boost an economy battered by months of demonstrations, Reuters reports.

Lam told reporters the Hong Kong Human Rights and Democracy Act signed into law by U.S. President Donald Trump last week, was “wholly unnecessary”. Hong Kong, which has been convulsed by nearly six months of pro-democracy protests, is now grappling with its first recession in a decade.

“The impact currently is on confidence,” Lam said. Companies “will be worried about the actions the U.S. government may take in the future after they review this legislation,” she said.

Separately, the justice secretary, Teresa Cheng, said she would return to her office on Wednesday after being on sick leave for more than two weeks following an altercation in London during which she was injured.

The Hong Kong government has previously said Cheng was targeted by a “violent mob” while on a trip to promote the city.

Cheng, who returned to Hong Kong from Beijing on Tuesday, told reporters at the airport that she had suffered a bone fracture around her wrist and had an operation in London.

“The hand is of course painful, but not as painful as the heart to see Hong Kong is still at the state we are in,” she said.

Lam did not specify what the next round of relief measures would include. The government has already offered around HK$21 billion ($2.7 billion) in economic support, particularly to help the transport, tourism and retail industries.

Retailers have been especially hard-hit. Hong Kong is famously a top shopping destination for Chinese tourists. But the unrest has scared off tourists and hit spending. Retail sales suffered their steepest fall on record in October.

The sometimes violent unrest that has rocked Hong Kong represents the biggest challenge to stability for China’s ruling Communist Party since the 1989 Tiananmen Square crackdown in Beijing.

Protesters are demanding universal suffrage, an investigation into alleged police brutality and an end to China’s perceived efforts to roll back the democratic freedoms promised when the former British colony was handed back in 1997.

China denies interfering in Hong Kong’s affairs and says it is committed to the “one country, two systems” formula enshrined at the handover. Beijing blames foreign countries including the United States for inciting unrest.

In more bad news for the economy, China on Monday banned U.S. military ships and aircraft from visiting Hong Kong – a rest and recreation stop for the U.S. Seventh Fleet – in retaliation for the U.S. legislation.

Lam said approvals for such port visits were a matter for China’s foreign ministry.

Activists have pledged to hold lunchtime rallies throughout the week after a mass demonstration over the weekend when police fired tear gas to disperse crowds of protesters.

Hundreds of office workers gathered in Hong Kong’s business district on Monday in support of the pro-democracy movement after it scored a resounding victory in district polls last month.

Lam has renewed her appeals for peace but – though it withdrew in September the extradition bill that sparked the first demonstrations – her administration has failed to offer any further concessions to the protest movement despite the election results.