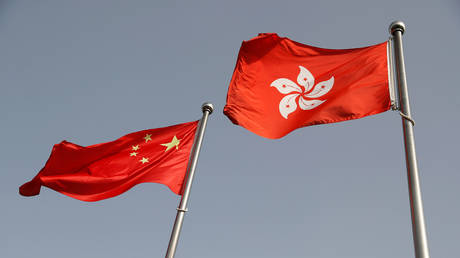 FILE PHOTO: The Chinese and Hong Kong flags flutter at the office of the Government of the Hong Kong, in Beijing, China. June 2020. © Carlos Garcia Rawlins / Reuters

The Hong Kong government said that they will not be “intimidated” by the new US sanctions and accused Washington of using the city as a wedge in US-Chinese relations.

Hong Kong spokesperson slammed the restrictions as an “utterly disrespectful attempt which will undermine Hong Kong-US relations at various levels.”

The latest US government measure represents blatant and barbaric interference in the internal affairs of the People’s Republic of China, using Hong Kong as a pawn in its ploy to create troubles in China-US relationship, out of the self-serving interests of some US politicians.

“We will not be intimidated,” the spokesperson said.

On Friday, the US slapped sanctions on 11 top Chinese officials, including Hong Kong Chief Executive Carrie Lam and the city’s police chief Chris Tang, accusing them of “undermining” Hong Kong’s autonomy and violating the rights of its residents.

Read more:   We will stand by Azerbaijan till the end - Ibrahim Kalin

US officials have been openly backing large-scale anti-Beijing protests in Hong Kong, which began last year and frequently descended into rioting and clashes with police. China, meanwhile, accused the US meddling in Hong Kong’s affairs and inciting violence there. (RT)

By now, 14 civilians were killed and 46 hospitalized with various injuries, and extensive damage…