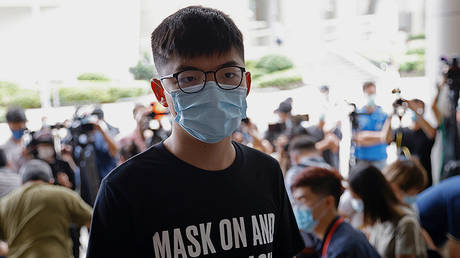 Activist Joshua Wong was jailed for 13-and-a-half months on Wednesday by a Hong Kong court for his role in last year’s riots in the city.

Last month, Wong pleaded guilty to organizing and inciting an unauthorized assembly outside a police station during 2019’s anti-government protests. As the offenses had taken place before China implemented its new national security law, he was only facing up to five years in prison, avoiding a potential life sentence.

Wong’s associates Agnes Chow and Ivan Lam were jailed alongside him for 10 and seven months respectively, after also pleading guilty to charges related to the same unlawful assembly.

Also on rt.com Taiwan will hurt its own people by sheltering Hong Kong ‘rioters & elements who bring chaos,’ China warns

Wong and Lam were previously jailed for their role in pro-democracy protests. Chow is facing further charges under the national security law, accused of colluding with foreign forces, which, if she is found guilty, could carry a life sentence. (RT)