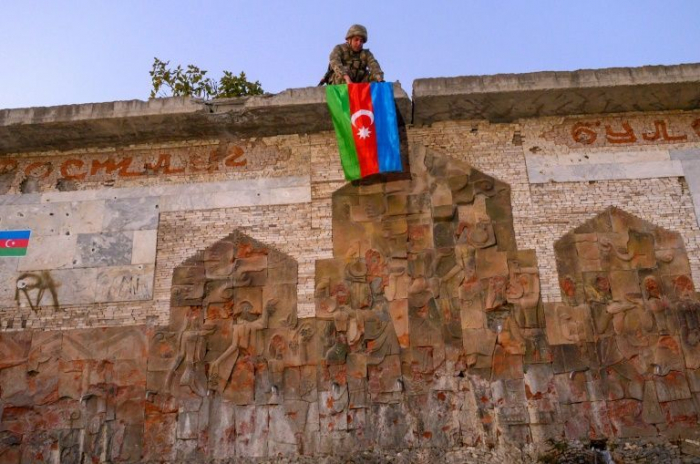 Gassan Akhmedov has one last wish – to return to the land of his birth, a land he says has been occupied for more than 25 years, Reuters reported.

That dream came a step closer, the 80-year-old resident of Baku says, when Azerbaijani troops captured the region of Jabrayil as part of their southern march on the enclave of Nagorno-Karabakh.

“Our native village has been liberated,” said Akhmedov, an elder in a run-down neighbourhood of the Azerbaijan’s capital populated largely by exiles of the 1991-94 war over Nagorno-Karabakh.

“We are waiting for authorities to clear it of landmines and to rebuild our houses so that we can return. That is where the graves of our fathers and grandfathers are.”

Azerbaijan and Armenia are locked in the South Caucasus region’s bloodiest fighting in decades. At stake is the fate of the mountainous enclave of Nagorno-Karabakh and seven Azerbaijan’s regions that surround it.

Read more:   Mourinho claims 'it's not very difficult to manage Chelsea' as he fires early shots at Tuchel before derby

Nagorno-Karabakh is internationally recognised as part of Azerbaijan but is populated and controlled by ethnic Armenians. Hundreds, perhaps thousands, have been killed since fighting flared again on Sept. 27. Three ceasefires have crumbled fast.

In Baku, residents speak of military gains that have seen Azerbaijan retake some of the territory lost in the 1990s. Billboards around the city and posters in shop windows have one, unambiguous message: ‘Karabakh is Azerbaijan. Karabakh is ours’.

“I feel pain for our boys,” said Olga Ismailova, an accountant, whose son lost a friend in the latest fighting, “but we must retake what is ours.”

Armenia, like Azerbaijan, regards Nagorno-Karabakh as part of its historic homeland and says the population there needs its protection. Azerbaijan rejects any solution that would leave Armenians in control of the enclave.

Azerbaijan’s defence ministry has said 55,000 volunteers signed up in July, during an earlier skirmish, but more recent numbers are classified.

Armenia says 10,000 people volunteered to take up arms on the first day of fighting and hundreds of Armenian nationals from as far afield as Argentina and the United States have rushed back to Armenia to begin combat training.

Construction worker Ramin Aliyev, 42, lives with other exiles in a district of small, shabby houses in Baku that grew outward from an unfinished hospital used to house refugees in the 1990s.

He said that, despite his age, he had sent multiple letters asking to be drafted and to put to use experience gained while serving in an artillery unit in Nakhchivan.

“I am ready to die for my motherland,” he said. “Let my children be proud of me.”

Those who cannot fight have found other ways to support. Pharmaceuticals executive Elnur Aliyev took an extended break from work to raise funds and send supplies to the front lines.

At a makeshift sorting facility provided by a local bakery, he and a dozen other volunteers pack boots, camouflage raincoats and hats into crates. They sift through piles of donated shoes and clothes for families who have fled shelling.

Aliyev said his group, one of several in Baku, had raised about $235,000 from hundreds of contributors at home and abroad.

Local radio stations dedicate much of their airtime to patriotic songs while Azerbaijan’s blue-, red- and green-striped flag hangs from many balconies, often side-by-side with the flag of Turkey, its ally.

Even to the most patriotic exile, however, Baku is not home.

“Ever since I heard our village had been liberated, Baku has felt foreign to me,” said Nemat Samedov, 33, a child when his family left. “I have signed up as a volunteer and I am waiting to be drafted.”