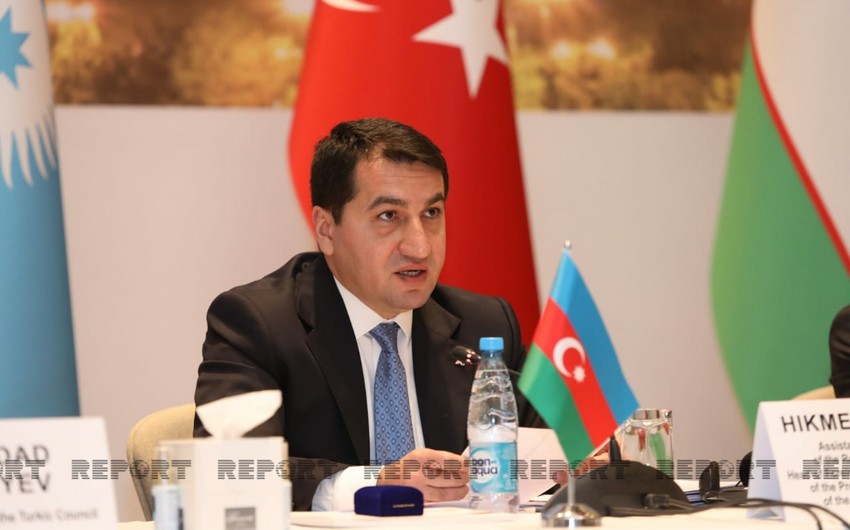 Statements regarding the achievement of an agreement on creating international mechanisms for protecting the rights and security of Armenians living in Karabakh are a lie.

Assistant to the President of Azerbaijan – Head of the Foreign Policy Department of the Presidential Administration Hikmat Hajiyev told Report, commenting on the statement of the Secretary of the Security Council of Armenia Armen Grigoryan about the alleged achievement in Washington of an agreement on the creation of international mechanisms to protect the rights and security of Armenians living in Karabakh.

Hajiyev noted that the essence of the discussions held by the Secretary of the Security Council of Armenia is distorted unilaterally:

“In my October 13 interview with Azerbaijani media, I gave detailed information about the content and nature of the discussions held in Washington. Once again, I want to note that the statements about the agreement allegedly reached in Washington on the creation of international mechanisms regarding the rights and security of the Armenian population living in the Karabakh region of Azerbaijan are false. The discussion of an issue in negotiations does not mean that an agreement has been reached on this issue. On September 27, at a meeting at the White House in Washington, hosted by US National Security Adviser Jake Sullivan, we reiterated that Azerbaijan would not discuss the rights and security of the Armenian population living in Karabakh with any international partners, as this is the internal affairs of our country, regulated under the Constitution and laws of the Republic of Azerbaijan. The talks of national sovereignty and the creation of an international mechanism are out of the question. Azerbaijan does not intend to discuss this issue either with Armenia or with other states and organizations. At the meeting, the US representative once again expressed respect for the sovereignty of Azerbaijan.”

According to Hikmat Hajiyev, the speech of Armenian officials with such statements about the sovereign territories of Azerbaijan, contrary to the declarations in Prague and Sochi, is regarded as an encroachment on the territorial integrity and sovereignty of Azerbaijan.