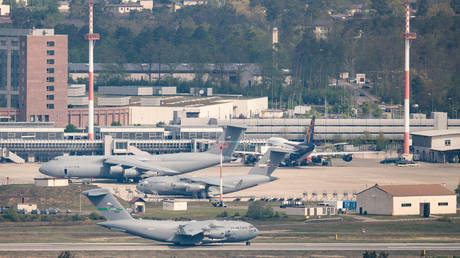 FILE PHOTO. The US Ramstein Air Base in Germany. ©Boris Roessler / picture alliance via Getty Images

The prime minister says nuclear weapons are banned by law in Finland FILE PHOTO. The US Ramstein Air Base in Germany. ©Boris Roessler / picture alliance via Getty Images

Prime Minister Sanna Marin of Finland said her nation’s expected accession to NATO does not involve an obligation to host NATO military bases or nuclear weapons. Neither idea is currently under discussion, she told an Italian newspaper during a working visit to Rome on Wednesday.

Marin was asked by the Corriere della Sera daily whether Finland would rule out the deployment of permanent NATO bases or nuclear weapons on its soil after joining NATO. Finland and Sweden have both applied for membership this week.

The ruling Swedish Democratic Party made it clear last week that while it supported seeking NATO membership, it would resist if asked to deploy foreign nuclear weapons or military bases. Finland, the Italian newspaper observed, didn’t make a similar clear commitment and asked Marin to comment.

“Nobody is forcing nuclear weapons or bases on us if we don’t want them,” she said, adding that in both cases the decision would be up to Finland.