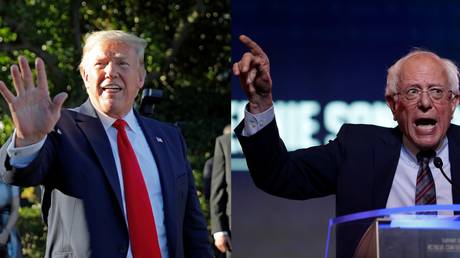 Democratic presidential hopeful Bernie Sanders has a swipe at US President Donald Trump, saying he does not deserve credit for preventing a possible war with Iran, as he is precisely the one who had driven the US to its brink.

In a an interview with CBS’s “Face the Nation’ host Margaret Brennan, the senator from Vermont could not suppress a smirk when mocking the notion that Trump somehow deserves recognition for defusing tensions with Iran with his last-minute decision to not proceed with attack on its military sites in retaliation to the downing of a US high-altitude drone earlier that day.

Also on rt.com US launched cyber-strike against Iran while backing away from military attack – report

Sanders argued that it was Trump’s fault, not merit, that the situation has flared up to the point that he had to hit the brakes.

“It’s like somebody setting fire to a basket full of paper and then putting it out. He helped create the crisis, and then he stopped the attacks.”

Trump on Saturday attempted to clarify him calling off the strike, tweeting that he “never called the strike against Iran “BACK,” but “just stopped it from going forward at this time.”

Trump previously said that he decided against the attack some 10 minutes before it could be launched, when American warships and military planes were only waiting for a ‘good-to-go.’ (RT)