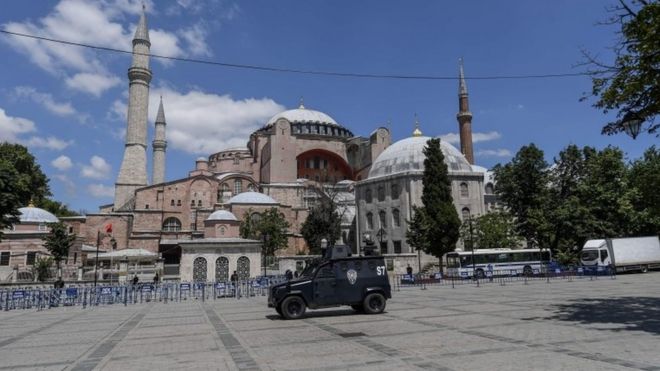 The World Council of Churches has called on Turkey’s President Recep Tayyip Erdogan to reverse his decision to turn the celebrated Hagia Sophia museum back into a mosque, BBC reported.

In a letter to Mr Erdogan, the Council, which counts 350 churches as members, said the move would sow division.

The Unesco World Heritage site in Istanbul has been a museum since 1934.

The president announced his decision on Friday following a court ruling which annulled its museum status.

The Hagia Sophia was built 1,500 years ago as an Orthodox Christian cathedral, but was converted into a mosque after the Ottoman conquest in 1453.

It was converted to a museum on the orders of Mustafa Kemal Ataturk, the founding father of modern, secular Turkey.

Since then religious services have been banned at the site, but devout Muslims have long campaigned for worship to be allowed.

What does the letter say?

The Geneva-based World Council of Churches says it represents more than 500 million Christians.

The letter is from Ioan Sauca, interim general secretary, who says the Council feels “grief and dismay”.

“By deciding to convert the Hagia Sophia back to a mosque you have reversed that positive sign of Turkey’s openness and changed it to a sign of exclusion and division.”

He writes that the decision “will inevitably create uncertainties, suspicions and mistrust, undermining all our efforts to bring people of different faiths together at the table of dialogue and co-operation”.

“In the interests of promoting mutual understanding, respect, dialogue and co-operation, and avoiding cultivating old animosities and divisions, we urgently appeal to you to reconsider and reverse your decision,” the letter continues.

What has President Erdogan said?

The case was decided by the Council of State, Turkey’s highest administrative body, following a petition from an NGO – the Association for the Protection of Historic Monuments and the Environment.

It argued that the building had been the private property of Ottoman Sultan Mehmed, responsible for turning the church into a mosque.

The issue has highlighted the clash between those who want Turkey to remain secular, and President Erdogan’s conservative religious base.

He defended his decision on Friday by stressing that the country had exercised its sovereign right in converting the building back to a mosque. The first Muslim prayers would be held on 24 July.

“Like all our mosques, the doors of Hagia Sophia will be wide open to locals and foreigners, Muslims and non-Muslims,” he said.

Today Turkey had “435 churches and synagogues open for worship”, while “few buildings our ancestors built in Eastern Europe and Balkans stand today”.

What other reaction was there?

Unesco expressed deep regret at the move and called for Turkey to open dialogue “without delay.”

The head of the Eastern Orthodox Church has condemned the move.

Greece, home to many millions of Orthodox followers, called it an “open provocation to the civilised world”.

The Church in Russia, home to the world’s largest Orthodox Christian community, immediately expressed regret that the Turkish court had not taken its concerns into account when ruling on Hagia Sophia.

And Turkey’s most famous author, Orhan Pamuk, told the BBC: “There are millions of secular Turks like me who are crying against this but their voices are not heard.”