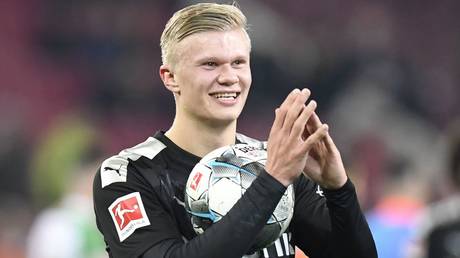 Teen sensation Erling Braut Haaland wasted little time in introducing himself to German top-flight football, scoring a hat-trick within 23 minutes of coming on for his Bundesliga debut in Borussia Dortmund’s 5-3 win at Augsburg.

Haaland, 19, joined the German side from Red Bull Salzburg earlier in January, opting for a move to Dortmund despite interest from the likes of Manchester United and Juventus.

And the big forward took no time at all to settle into life in Germany, hitting three goals in the space of 20 second-half minutes away at Augsburg in Dortmund’s first game back after the winter break.

Haaland replaced Lukasz Piszczek on 56 minutes with Dortmund 3-1 down, but soon set about reversing that scoreline, finding the net with his first touch just three minutes after coming on.

Jadon Sancho then equalized for Dortmund, before Haaland took over the show, adding his second – and Dortmund’s fourth – on 70 minutes, and then completing his hat-trick in style in the 79th minute when he collected a Marco Reus through-ball and calmly slid the ball left-footed past Tomas Koubek in the Augsburg net. 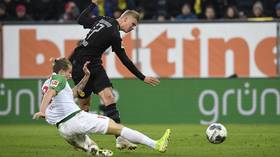 It was a dream league debut for the Norwegian youngster, and took his incredible tally for the season to 31 in just 23 games across all club competitions.

It also had social media raving over a player seen as one of the brightest young talents in the game.

The way Messi ‘takes care of himself’ means he’ll be playing until he’s at least 38, says Barcelona legend Puyol