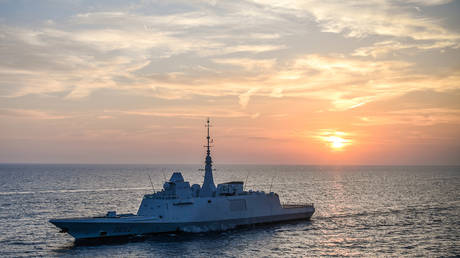 A French frigate FS Provence (D652) is seen from a helicopter off the coast of Toulon, France, November 14, 2018. © Reuters / Christophe Simon

Greece has signed a contract with France to purchase three new frigates, with an option to buy a fourth vessel in the future, as Paris attempts to recover its losses from a major submarine contract with Australia.

At a news conference on Tuesday with his Greek counterpart, Prime Minister Kyriakos Mitsotakis, French President Emmanuel Macron praised the pact and its wider benefits for the European continent.

“It contributes to European security, to the strengthening of Europe’s strategic autonomy and sovereignty, and thus to international peace and security,” Macron said.

The Athens-Paris alliance, which allows Greece to purchase three frigates from France, and a fourth optional, was hailed by Mitsotakis as binding the two countries together “for decades.”

Also on rt.com Give ‘moi’ a break: UK PM Johnson tells France to get over their AUKUS deal grievances

Greece’s PM, however, made it clear that the deal would not spoil Greek-US relations, nor hinder a deal it has under discussion with Washington. “France stood by us during difficult times in the summer of 2020,” Mitsotakis explained, referring to tensions with Turkey in the Aegean Sea.
(RT)