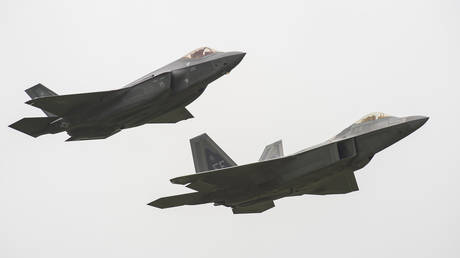 Athens is expressing the desire to join the F-35 program and is lobbying against Turkey’s attempts to upgrade its own air fleet FILE PHOTO. © Steve Thorne / Getty Images

Greece has confirmed its desire to purchase a squadron of F-35 stealth fighter jets from the US, while lobbying against its regional rival Turkey’s attempts to upgrade its air force.

Greek Prime Minister Kyriakos Mitsotakis visited the White House and Congress this week to discuss the deal and announced that his country would move forward with its bid to acquire 20 to 24 F-35 fighter jets after 2028.

“We will launch the process for the acquisition of a squadron of F-35 aircraft, and we do hope to be able to add this fantastic plane to the Greek Air Force before the end of this decade,” Mitsotakis said at the White House, after previously noting that Lockheed Martin, which produces the jets, “officially expressed its interest in investing in Hellenic aerospace.”

Mitsotakis has also expressed concern over Turkey’s attempts to upgrade its F-16 fleet, accusing Ankara of endangering security in the eastern Mediterranean. Back in April, Greece and Turkey accused each other of airspace violations.

“The last thing that NATO needs at a time when our focus is helping defeat Russian aggression is another source of instability on NATO’s southeastern flank,” Mitsotakis told lawmakers in Congress on Monday. “I ask you to take this into account when you make defense procurement decisions concerning the eastern Mediterranean.” (RT)