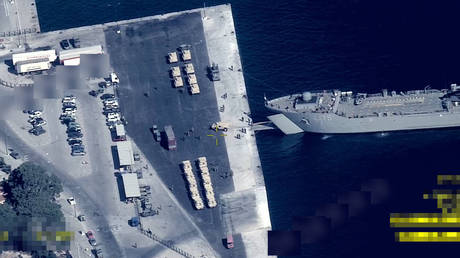 Athens has sent unspecified “military vehicles donated by the US” to the Aegean Islands of Lesbos (known in Turkey as Midilli) and Samos (Sisam), the sources said. Each island is said to have received 23 and 18 vehicles respectively, delivered in batches over the past week.

Drone footage circulated by Turkish media shows military vehicles sitting in rows at a port installation with a landing ship moored nearby and its cargo hold open.

The alleged deployment is in violation of the demilitarized status of the island, the sources claimed, accusing Athens of making no effort to defuse the tensions between the two countries.

“That Greece does not even attend the meetings despite invitations and makes such provocations show who increases the tension, who is irreconcilable, aggressive and unlawful,” the sources said. 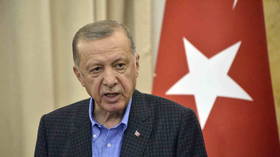 The supposed demilitarization of the islands, however, has long been disputed by Athens and Ankara. While the islands were placed under demilitarization by the Treaty of Lausanne in 1923, Greece was still allowed to maintain a garrison recruited from locals and a police force.

Tensions between Turkey and Greece, two NATO allies with a long history of mutual enmity, have been soaring since late August. At that time, Ankara accused Athens of locking its Russian-made S-300 air defenses on Turkish military jets flying over neutral waters. Greece dismissed the claims, with military sources telling local media that the air defenses were not activated on the day of the purported incident.

Read more:   China says it has agreed with U.S. to cancel tariffs in phases

Early this month, Turkish President Recep Tayyip Erdogan accused Greece of “occupying” the Aegean Islands warned the country it could end up paying a “heavy price.” Athens has repeatedly rejected attempts to question its sovereignty over the islands. (RT)