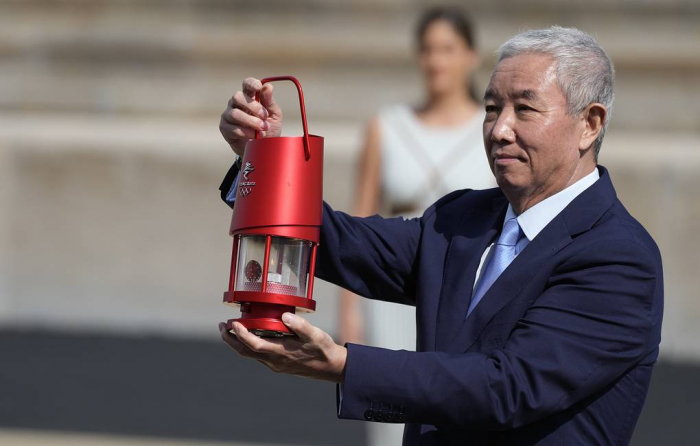 The Olympic flame of the 2022 Winter Olympic Games in China was handed over to the Beijing 2022 Organizing Committee delegation on Tuesday at the Panathenaic Stadium in Athens.

The Olympic flame was lit on Monday during a solemn ceremony in Ancient Olympia. Due to the pandemic restrictions, only three legs of the torch relay took place before the flame was brought near the Panathenaic Stadium in Athens, where it stayed for the night.

Greek cross country skier Paraskevi Ladopoulou brought the flame today inside the white marble stadium, which hosted the first modern Olympics in 1896, and lit the cauldron. Then, Greek actress Xanthi Georgiou, dressed as an ancient Greek High Priestess, passed on the flame to Spyros Capralos, who handed it over to Yu Zaiqing.

Spyros Capralos said speaking at the ceremony that “This unique flame will convey a message of peace and friendship.”

“But it will also carry with it the respect and goodwill of the Greek towards the Chinese people,” the IOC press office quoted the Greek sports official as saying. “Two nations that count thousands of years of history and close relations.”

“We deliver to you here, at the Panathenaic Stadium, where the first modern Olympic Games took place in 1896, the sacred Light of Olympism,” Capralos stated. “To carry it to your distant yet beautiful country, to continue the remainder of its journey, sending out messages of peace, friendship, brotherhood and solidarity.”

Speaking at the handover ceremony, Zaiqing Yu said: “In a short while, the Olympic flame will be passed on to Beijing for the second time.”

“As a symbol of the Olympic spirit, the Olympic flame will travel to the Great Wall and across other parts of China, bringing with it the light of peace and friendship,” he continued.

“The Beijing 2022 Olympic Winter Games will open on 4 February 2022. Committed to a green, inclusive, open and clean approach to preparing and hosting the Games, we will deliver streamlined, safe and splendid Games, which hopefully will help promote the Olympic Movement and the building of a global community of shared future,” Zaiqing Yu added.

After today’s ceremony at the Panathenaic Stadium, the flame will be transported to the Athens International Airport and then delivered to Beijing on a special charter flight.

The ritual of lighting the Olympic flame dates back to the ancient Olympic Games in Greece. It is a reminder of the legend of titan Prometheus, who stole fire from the Gods and gave it to human beings as a gift. The modern tradition was revived in 1928, at the Amsterdam Olympics, when the Olympic flame was for the first time lit at the main stadium. And in 1936, before the Olympic Games in Berlin, a torch relay was held for the first time in modern history.

The 2022 Winter Olympic Games in the Chinese capital of Beijing are scheduled to be held between February 4 and 20.

Beijing won the right to host the 2022 Olympics and Paralympics in a tight race, beating Kazakhstan’s Almaty in 2015, by chalking up 44 votes against its rival’s 40.