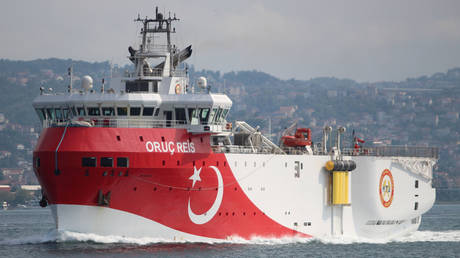 Turkey’s natural gas exploration and military activities in the disputed waters of the Eastern Mediterranean have been roundly condemned by its neighbors, who also criticized the recent reopening of a beach area in North Cyprus.

In a joint statement issued on Wednesday at a one-day summit, the leaders of Egypt, Cyprus and Greece rebuked what they termed Ankara’s “illegal drilling” and “aggression” in the region. The trio called on Ankara to cease its activities in the Exclusive Economic Zone (EEZ) off Cyprus, the outer border of which runs close to Turkey.

It is the latest exchange in a terse war of words over Turkish activities near the Aegean Sea, which last week saw Greece and Cyprus reach out to the EU for support. On Tuesday, Greece urged the EU to stop military exports to Turkey, accusing Ankara of violating the conditions for accession to the bloc, which it has been negotiating for over 20 years. (RT)