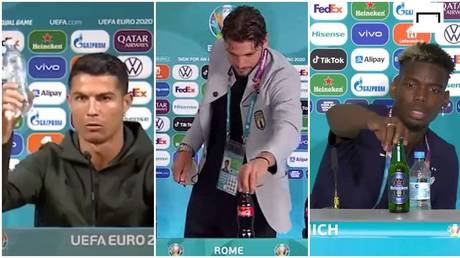 Teams at Euro 2020 could be slapped with fines unless stars such as Cristiano Ronaldo and Paul Pogba stop getting rid of bottles provided by sponsors at press conferences.

Ronaldo shifted a pair of Coke bottles out of view during his press conference earlier this week – shaving a few billion off the American company’s share price in the process – while promoting the virtues of drinking water.

Elsewhere, French World Cup winner Pogba – a devout Muslim – ditched a bottle of alcohol-free Heineken placed in front of him as he appeared for the press.

But UEFA has now stepped in to threaten fines to associations whose players don’t toe the corporate line.

“UEFA has reminded participating teams that partnerships are integral to the delivery of the tournament and to ensuring the development of football across Europe, including for youth and women,” read a statement.

Euro 2020 director Martin Kallen said he understood the religious reasoning of players such as Pogba, but noted that stars were contractually obliged “through their federation of the tournament regulations to follow.”

According to Kallen, quoted by the BBC, disciplinary action was a “possibility” – although no sanctions would be taken against players directly, and instead would be levied at the relevant national associations.

“We are never fining players directly from the UEFA side,” Kallen said.

“We will do this always through the participating national association and then they could look if they will go further to the player, but we are not going directly for the moment to the player.”

While the likes of Ronaldo are among the corporate refuseniks, Russia manager Stanislav Cherchesov became a viral smash when he was seen happily swigging on a bottle of Coke at a press conference before his team took on Finland.

Ukraine forward Andriy Yarmolenko also made light of the situation after his man-of-the-match display against North Macedonia on Thursday.

The West Ham forward moved the Coca-Cola and Heineken bottles closer to him, jokingly urging the companies to “get in touch” with him for sponsorship opportunities.