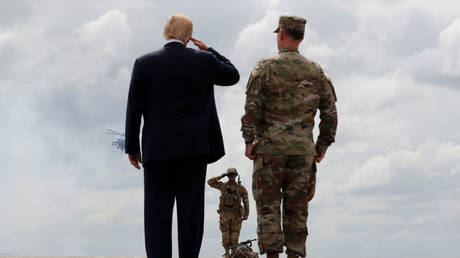 The world has spent $1.8 trillion on its military in 2018. The US is leading the charge, while some of its NATO allies are also buffing their war budgets citing the Russian threat while Moscow decreased its military spending.

The past year has been immensely successful for the war industry, according to the data by Stockholm International Peace Research Institute (SIPRI). According to its newest report, released on Monday, the global military spending went up 2.6 percent to reach its highest number since at least 1988, when researches began tracking the data.

The five largest military spenders in 2018 were:

The US spent $649 billion last year, which amounts to 36 percent of the world’s total, has outspent its closest pursuer, China, almost by three times having spent almost as much as eight next countries combined.

The surge in military spending has been fueled by the exacerbating rivalry between the US and China, as well as strained situation in Asia where India increased its spending by 3.1 percent and Pakistan (11 percent hike).

“The tensions between countries in Asia as well as between China and the USA are major drivers for the continuing growth of military spending in the region,” Pieter Wezeman, a senior researcher at the SIPRI Arms and Military Expenditure (AMEX) program, said.

While Washington has been an undisputed leader of the chart for years, last year it upped its game even more, increasing its military spending for the first time since 2010. The surge in the US defense spending is a direct reflection of the Trump administration policy, according to SIPRI.

“The increase in US spending was driven by the implementation from 2017 of new arms procurement programs under the Trump administration,” Dr Aude Fleurant, director of the SIPRI AMEX, noted.

Staying true to an upward trend of 24 years, China has increased its spending by 5 percent. However, the pace of its military growth has slowed down with the five percent increase being its lowest since 1994. In total, Beijing has forked out $250 billion for military needs. (RT)