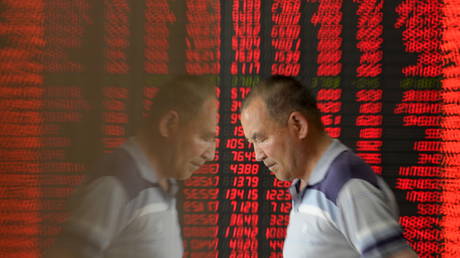 Financial markets across the globe plummeted on Monday following a re-escalation in US-China trade tensions as US President Donald Trump threatened to slap China with new tariffs.

The worst losses in Asia were seen in China where the Shanghai composite fell 5.58 percent to close at 2,906.46. The Shenzhen component dropped 7.56 percent to finish at 8,943.52. In Hong Kong, the Hang Seng index was down more than 3 percent. Chinese currency, the yuan, has also declined, slumping more than 1.3 percent against the US dollar, which is its heaviest fall in more than three years.

Australia’s benchmark ASX200 was down 0.8 percent, Singapore’s STI key index was off 3.4 percent. Japanese markets were closed for a public holiday. (RT)