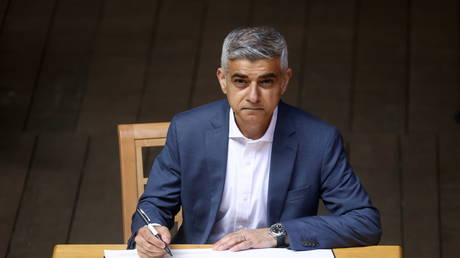 The mayor of London has unveiled his latest scheme aimed at making the capital more diverse. A £1 million fund will grant community-led organizations up to £25,000 to improve their public places, including changing street names.

In a press release on Thursday, the office of Sadiq Khan, the mayor of London, announced the creation of a £1 million Untold Stories fund which aims to “champion diversity and improve representation in the capital’s public spaces.”

The fund will be made available to community-led groups, who can receive up to £25,000, as a grant. The mayor’s office highlights that the money could be used for new ideas such as “murals, street art, street names and other projects to ensure we are told a fuller version of our capital’s story.”

“London’s diversity is its greatest strength but for far too long our capital’s statues, street names and buildings have only shown a limited perspective on our city’s complex history,” Khan said in a statement.

The announcement followed a City Hall-funded study into the capital’s 1,500 monuments. It found that only 4% of statues were dedicated to named women, and only three of them depicted women of colour. There are also twice as many statues depicting animals as women.

Unsurprisingly, the mayor’s latest woke escapade hasn’t gone down well on social media, where many Britons demanded Khan stop wasting taxpayers’ money. One Twitter user labelled the move as an “unnecessary gesture” and called on Khan to focus on more important issues, such as homelessness and affordable housing.

Others concurred: “How about he spends it on fighting knife crime instead. How anyone votes for him is beyond me,” another social media user wrote. “That’ll stop all the stabbing,” one person chimed in ironically.

Read more:   Next payment of interests for SOCAR bonds to be made on April 17

Some people even asked for their council tax back, noting that the mayor’s office clearly had spare money to throw away on diversity projects such as this.

Can I have my council tax increase back then as he’s obviously got spare money to throw away.

Others were more concerned about aspects of the city’s history being continually cancelled. One person argued that the capital’s history was now being “systematically stripped away,” while another asked why the mayor was so intent on cancelling Britain’s heritage and way of life; “if people are offended by such simple things, then they know where the exit is,” they added. (RT)