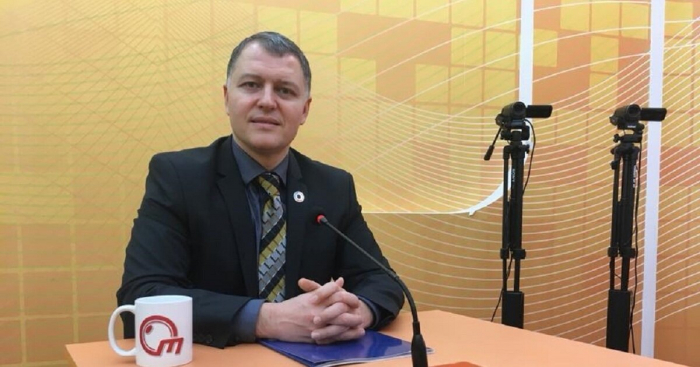 The outbreak of the coronavirus pandemic in the world has entered a new stage, associated with a record increase in cases of COVID-19 in India. The US has been restricting the entry of travelers from India since May 4. Similar restrictions are imposed in other states, for instance, in neighboring Georgia. The peculiarity of the Indian strain is that it spreads at an incredible speed almost with 300 thousand cases a day.

Member of the Independent Assessment Committee (IAC) of the Global Alliance for Vaccines and Immunizations’ (GAVI) Pneumococcal Advanced Market Commitment (AMC) and former adviser to the UN Secretary-General Professor Giorgi Pkhakadze, who is currently in Paris answered reporters’ questions.

– What is the overall situation in Georgia?

In Georgia, the situation is similar to many poor countries, where the political situation is also difficult. Politicians try to show that everything is fine but it is not so. It is necessary to vaccinate at least 90% of the adult population to get 70% of the total number of people living in the country. Then we can talk about safety. Taking into account the second vaccination, Georgia needs 3 million vaccines. Some of the vaccines were purchased, the other was donated by China, which is engaged in vaccine diplomacy. However, it is a drop in the ocean.

And we must also understand that we are all countries of the region, we are neighbors. Turkey, Iran, Russia, the states of the South Caucasus – we all are in the same pot. The situation is complicated everywhere.

– For instance, in Azerbaijan almost a million people have already received the first dose of the vaccine, the second – by over 500 thousand.

– Vaccination is effective, regardless of the type of vaccine. The number of people who get into hospitals is decreasing with a lower mortality rate. It is true that the vaccine may not protect against infection, but it will help you avoid getting into the intensive care unit or the cemetery. The Chinese vaccine works well against the first Wuhan virus, the original virus. Slightly less effective against the British strain, which is now in all countries of the region. And even less from the Brazilian, South African and Indian strains. Once again, I want to emphasize the most important thing. The vaccine may not protect against the spread of coronavirus, but it will save people, especially those with chronic diseases. And if the vaccinated people get sick with the “coronavirus”, then the disease will pass in a mild form.

The spread of the infection can be prevented by wearing medical masks.

– We touched on the topic of new strains. They emerge all the time, here’s British, Indian…

– … And maybe also Georgian, Azerbaijani, Turkish or Armenian. The fact is that viruses are living organisms that multiply, change and mutate. Up to 500 mutations occur within a week. And as a result, we already have 14 resistant strains that are quite dangerous. There are California and New York strains in the US. We have already spoken about Brazil and South Africa. But the most dangerous is Indian. Basically, after mutations, the virus weakens, ultimately it is transmitted like the flu (but we must not forget that the flu is not a very mild disease).

Now about India. A catastrophic situation has happened there. About 300 thousand people are infected per day. I have worked in India for over seven years. Now I communicate with colleagues from this country and I perfectly understand what is happening there. With each identified infection, there are at least 20-30 undetected cases. Imagine the significance of the problem. The virus “exploded” and there is a great chance that new strains will emerge such as “India-2”, “India-3”.. It is biology. Possibility of new mutations increases with a high number of new infections.

– But you said that viruses weaken after mutations.

– That’s right, they are getting weaker. But there are also outbursts. I told you about 14 dangerous mutations, but there are more of them, just its identification is a difficult and expensive process. It’s great that there is a Lugar laboratory in Georgia. The Americans helped us to build it and there we can identify strains.

– But when can we expect the end of the pandemic in its actual form?

– As I said, it will happen when 70% of the world’s population (or 90% of adults) is protected by vaccines. Generally, two methods exist in regard to fighting with the spread of the virus. The first is Chinese while the second is Israeli. The Chinese method is a complete lockdown, control over the movement of people using the WeChat app – contact tracing. Thanks to this, there is practically no coronavirus in China. Similar, but slightly softer method was applied in Australia and New Zealand. These are island states, they simply closed themselves off from the outside world. The Israeli version is a complete vaccination of the population. The United States is also working in this direction.

And now on durations. As soon as America and Europe are vaccinated, the supply of vaccines to other countries will start. Generally, we can say that the required number of people in the world will be vaccinated by the end of 2022. By 2023 the situation with the pandemic will be better. Mobilization of the entire scientific community will also help. More than 180 vaccines are already in the process of being tested. There are dozens of different types of drugs (not vaccines), which help to fight with coronavirus.

Read more:   He did it for the memes?!! Musk claims cybertruck orders through the roof after presentation 'fiasco'

– But COVID-19 reinfections happen, antibodies do not last long.

Yes, it is scientifically proved data: a person, who has been infected with coronavirus, is protected for six months. And all vaccines only protect six months. And then – yes, you will have to be vaccinated again, already, perhaps, with one dose. And here I want to say once again about the Indian mutant virus. This mutant virus can be found in people who have already been ill and have immunity. Vaccinated people also can be infected with this strain. Therefore, this strain is dangerous.

We knew about the Indian strain back in November last year, it appeared in the slums of Mumbai. But what happened in India? They opened the country, elections were held in five states. there were several large-scale religious events without masks and social distance.

– The percentage of deaths from coronavirus is not increasing.

– No. We already know how to manage this virus. I will give you data. At the beginning of the pandemic, 7 out of 10 people, who were admitted to intensive care died. At the end of last year – three out of ten. Now there is one death per 20 people in intensive care. There is an international protocol and drugs. New strains do not increase mortality by the number of cases.

By the way, I want to express my gratitude to Azerbaijan, which helped Georgia a lot during the second wave of the coronavirus. Azerbaijan saved our country. The country supplied oxygen to Georgian hospitals last November, when we had seven thousand infected a day. Without oxygen provided by Azerbaijan, Georgia would have a very high mortality rate.