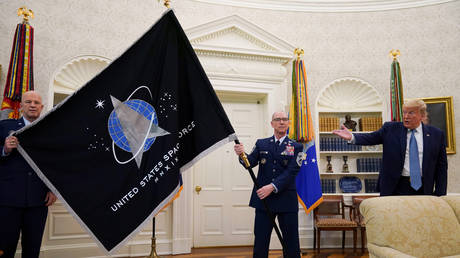 The sight of a US Space Force flag at Joe Biden’s inauguration irked Trump critics, with some of them calling for the military branch created by the former president to be thrown in the dustbin along with the rest of his legacy.

I’m still shaking my head at the Space Force logo.

Takei was one of numerous vocal Trump critics to get the new military branch trending, outraged at the very sight of the flag next to other branches of the military.

I see the flag, but I still refuse to believe Space Force is real

The Space Force flag’s presence will forever be hilarious. Honestly an incredible gag.

It remains to be seen how Space Force, a branch of the military focusing on space, will fare under Biden’s administration, but his pick for defense secretary, Lloyd Austin, told lawmakers this week that, if confirmed, he will “ensure the space domain is carefully considered across the range of upcoming strategic reviews.” (RT)