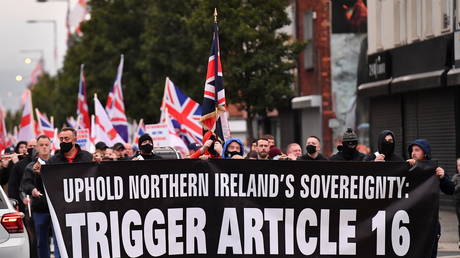 Loyalist demonstrators hold a banner during a protest against the Northern Ireland protocol as a result of Brexit, in Belfast, Northern Ireland, (FILE PHOTO) © REUTERS/Clodagh Kilcoyn

A spokesperson for the German government has said Berlin rejects any further negotiation concerning the Northern Ireland Protocol, but it supports European Commission attempts to find a solution.

Speaking on Friday, a German government spokesperson reiterated the country’s support for the European Commission and its attempt to find a solution to the issue of the Northern Ireland Protocol.

“The goal is to work with Great Britain to find solutions to implement the protocol, and the European Commission has the German government’s full support in this regard,” the spokesperson stated.

“However, we refuse to renegotiate the protocol,” they added, dismissing UK Brexit Minister David Frost’s demands for two to three weeks of “intense” talks. (RT)