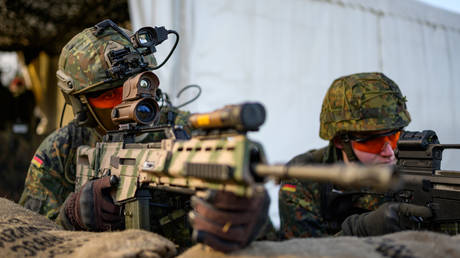 Soldiers of the Bundeswehr squat with the G36 A2 assault rifle during a demonstration in a position. © Philipp Schulze / picture alliance via Getty Images

Chancellor Scholz has promised to make the Bundeswehr the “biggest conventional army” among European NATO member states Soldiers of the Bundeswehr squat with the G36 A2 assault rifle during a demonstration in a position. © Philipp Schulze / picture alliance via Getty Images

The German military will contribute considerably to the strengthening of NATO’s east flank, the country’s Chancellor, Olaf Scholz, has announced. He also promised major investment that would turn the Bundeswehr into the largest military force among European members of the US-led military bloc.

Speaking before the German parliament on Wednesday, Scholz assured fellow lawmakers that Berlin would “defend every square meter” of NATO territory, if necessary. The chancellor added that the alliance’s members in Eastern Europe could count on Germany. The country would increase its military presence in the region, including in and around the Baltic Sea, Scholz revealed.

Among the countries where the Bundeswehr will be permanently stationed as part of NATO forces is Lithuania. The Baltic state’s already strained relations with Moscow further escalated last week when Vilnius decided to block the transit of sanctioned goods to Russia’s Kaliningrad exclave. The Kremlin warned it would retaliate severely.

Commenting on Germany’s and NATO’s relations with Russia, Scholz pointed out that a partnership with the eastern neighbor is “unimaginable in the foreseeable future” now that an “imperialist Russia” has attacked Ukraine. (RT)

Moscow has accused Ukraine of shelling the Zaporozhye facility, while Kiev and the EU blame…

02:39 Mass protests against ‘Europride’ in Serbia