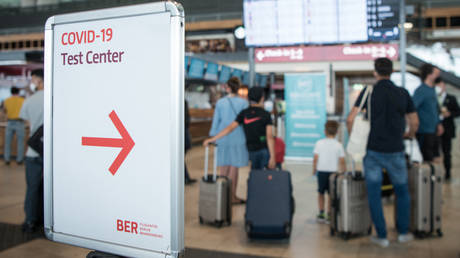 Passengers stand with suitcases at the BER "Willy Brandt" airport in Brandenburg, near Schoenefeld and Berlin, on July 28, 2021. © AFP / Stefanie Loos

German authorities have removed South Africa from the country’s ‘virus variant’ list, as the extra-contagious Delta strain dominates other Covid-19 variants. The change paves the way for the easing of strict travel restrictions.

South Africa, as well as eight other African nations, will no longer be on Germany’s ‘virus variant’ watch list, a spokeswoman for the county’s Ministry of Health told local media on Friday. The change is set to take effect on Sunday.

The change comes after the Delta variant of the coronavirus, which is also prevalent in Germany, became dominant in some African counties. The extra-contagious strain wrestled out the Beta variant (commonly referred to as ‘South African’). (RT)