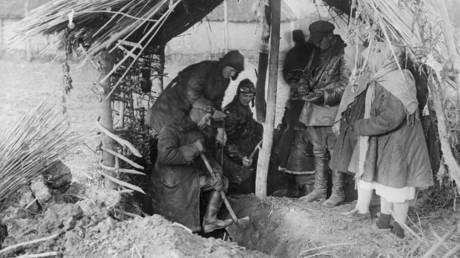 The German parliament on Wednesday adopted a resolution declaring that the 1930s famine in Ukraine fits the historical and political classification of a “genocide,” blaming it on the Soviet Union. The resolution means Berlin should continue to support Ukraine against Russia, its authors said.

“The mass deaths from starvation were not the result of failed harvests, but were the responsibility of the political leadership of the Soviet Union under Joseph Stalin,” said the Bundestag press release. Referring to the 1930s famine by the Ukrainian term “Holodomor,” the German MPs said it represented a “crime against humanity” and that from today’s perspective its “historical-political classification as genocide is obvious.”

According to the resolution, “in the winter of 1932/1933 alone, 3-3.5 million people starved to death in the Ukraine.” While “millions of people lost their lives as a result of politically induced famines” in other parts of the USSR, the authors acknowledge, they insist the famine in Ukraine was a Soviet project to destroy “the Ukrainian way of life, language and culture.”

The resolution requires the German government to “continue to decisively counteract any attempts to launch one-sided Russian historical narratives,” while providing “political support” to the Holodomor victims, meaning the government in Kiev.

Describing Ukraine as a victim of Russian aggression and imperialism, the Bundestag insists Germany should continue to give it “political, financial, humanitarian and military support.”

As to what gives them the right to make such pronouncements, the German MPs pointed to their own country’s “historical responsibility” for the Holocaust of European Jews and the “racist German war of annihilation” against the Soviet Union. The resolution passed with a majority of votes from the ruling “traffic light” coalition and the opposition CDU, while the AfD and Die Linke MPs abstained.

The Bundestag resolution comes just days after Pope Francis also called the famine “the genocide that Stalin committed against the Ukrainians,” which he claimed was “a historical antecedent of the [present] conflict.” His interview with an American Jesuit magazine drew condemnation from Moscow for racist characterizations of Muslim and Buddhist Russians.

While the government in Kiev has long claimed that the 1930s famine was a deliberate genocide of Ukrainians, as late as 2010 they were blaming Ukrainian communist officials for it and insisting there were “no claims” against any third party, including modern Russia.

Moscow’s position on the “Holodomor” has been that describing it as genocide is “politically charged and contradicts historical facts.” (RT)