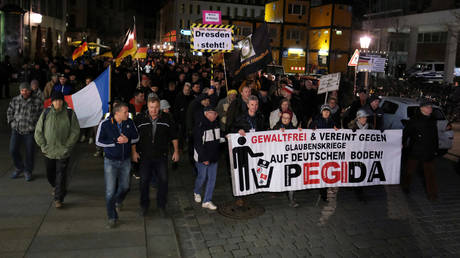 Germany’s security service in the eastern state of Saxony has officially classified the anti-Islam and anti-immigrant Pegida group as a “proven extremist organization.” The movement came to the fore amid the 2015 refugee crisis.

The Pegida movement (Patriotic Europeans Against the Islamization of the Occident) is now officially considered an extremist organization in its own “birthplace” – Germany’s eastern federal state of Saxony. The organization first came to be in the region back in October 2014, when Europe saw a massive influx of refugees and migrants from the Middle East and North Africa.

The group positioned itself as a grassroots movement opposing what they called a creeping Islamization of Europe, and gained prominence due to massive rallies it organized to show its discontent with the “open-door” policy of German Chancellor Angela Merkel. (RT)