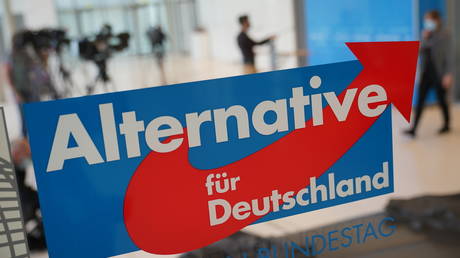 Germany’s domestic intelligence service, the BfV, has classified the right-wing Alternative for Germany (AfD) party as a “suspected” extremist group, according to the media. The move allows extensive surveillance of the party.

Such designation allows the German domestic security service tasked with combating terrorist and extremist activities to monitor a group’s actions by employing extensive intelligence and surveillance means, including tapping into phone conversations, monitoring emails and requiring informants from within the group’s ranks.

Also on rt.com Germans say far-right MORE DANGEROUS than Islamists, but is Merkel’s shaky govt there to take on growing threat?

The decision was based on a lengthy report compiled by a group of lawyers and right-wing extremism experts, who supposedly discovered overwhelming evidence of the party’s violations of the nation’s “free democratic basic order.”

The concerns said to be listed in the document include the reports about the growing influence of the former members of the party’s radical faction dubbed ‘The Wing’. The faction led by the highly controversial AfD regional leader, Bjoern Hoecke, was dissolved last year after the BfV declared it a “proven” extremist group but its members allegedly continued to wield significant power within AfD.

Read more:   Who are the Russian team who nearly shocked hosts Japan in their Rugby World Cup opener? - VIDEO

The report also points to the party’s links to the far-right Identitarian Movement of Germany that was also declared a right-wing extremist group by the BfV as well as other controversial movements and organizations that have provoked the security service’s concern. One of them is the ‘Compact’ magazine promoting the view of Covid-19 deniers and right-wing conspiracy theorists.

The reported decision sparked an angry reaction from the AfD as the party members slammed the designation as a step aimed at undermining the party’s chances at the upcoming regional and federal elections. Alice Weidel, the co-chair of the party’s faction in the Bundestag, called the move “purely political,” adding that the designation “would not stand” in the German Constitutional Court.

The party’s co-chair, Alexander Gauland, told journalists that the BfV’s goal “is apparently to weaken the party in the short run before the elections” and to “destroy the only opposition party in the Bundestag” that opposes the “unrestricted immigration of foreign culture [members].”

The second AfD co-chair, Tino Chrupalla, branded the move “scandalous,” while accusing the BfV of providing the “corresponding information” to the media to “influence the democratic party competition to the detriment of the AfD.”

The designation comes less than two weeks before the regional elections in the German states of Baden-Wuerttemberg and Rhineland-Palatinate. Another regional vote in the state of Saxony-Anhalt is scheduled for June 6 while the federal parliamentary elections as well as regional votes in Thuringia, Berlin and Mecklenburg-Western Pomerania will be held in late September.

The party already challenged the BfV decision through legal means – so far in the Cologne Administrative Court – and the proceedings are still ongoing. This week, the BfV pledged before the court to refrain from using intelligence instruments in monitoring the activities of the party’s federal and regional MPs as well as MEPs and the candidates for the upcoming elections until the end of the proceedings.

It also vowed to refrain from publicly announcing its decision to designate the party as a “suspected” extremist group. “In light of the ongoing proceedings and with respect to the court, the Federal Office for the Protection of the Constitution is not making a public statement on this matter,” the agency told journalists on Wednesday.

‘Right thing’ to do?

The BfV decision has already won almost unanimous praise from other German political forces. Surveillance over the AfD is “exactly right and also necessary,” the Secretary General of the Social Democrats Lars Klingbeil told Der Spiegel while calling the AfD an “inhuman and anti-democratic” force with a “right-wing extremist face.”

The Secretary General of Bavaria’s Christian Social Union (CSU) Markus Blume also called the move “absolutely correct” while noting that the AfD “has no business in the parliaments.” Green MPs Irene Mihalic and Konstantin von Notz also expressed their “understanding” to the move. (RT)