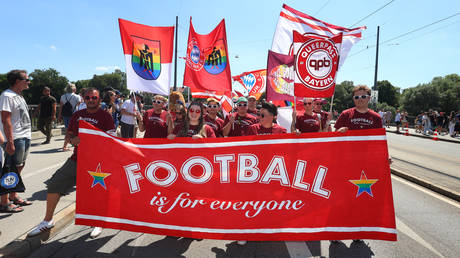 A Qatari dignitary was told that his country must denounce the death penalty for homosexuality An LGBT fan group of German football club Bayern Munich hold a parade in July 2022. © Karl-Josef Hildenbrand/picture alliance via Getty Images

An LGBT rights campaigner has told a Qatari ambassador that his country must end its stance on gay people months out from the start of the FIFA World Cup.

Qatar’s hardline position on various social and political practices which are commonplace in the West has come under intense scrutiny in recent months as the Middle East country prepares to host the 2022 World Cup in November.

Currently, LGBT individuals face legal quandaries not experienced by non-LGBT citizens in Qatar, with male homosexuality punishable by up to three years in prison along with a heavy fine.

Additionally, sharia law dictates that Muslims engaging in homosexual activity are liable to be executed – however, as of 2019 there are no known cases of a homosexual person being subject to the death penalty in Qatar. 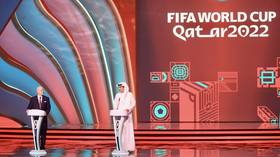 And just two months ahead of the beginning of the tournament, a representative of a German supporters’ group has directly appealed to Qatari ambassador Abdulla bin Mohammed bin Saud Al Thani at a forum in Frankfurt, asking him to petition his country to reevaluate its stance on the LGBT community.

“I do – please don’t be shocked – have sex with other men. This is normal. So please get used to it, or stay out of football.

He continued: “So abolish the death penalty. Abolish all of the penalties regarding sexual and gender identity. The rule that football is for everyone is so important. We cannot allow you to break it, no matter how rich you are.

“You are more than welcome to join the international football community and also, of course, to host a big tournament. But in sports, it is how it is. You have to accept the rules.” 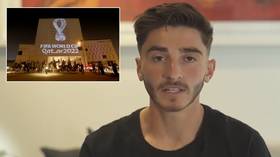 Al Thani was invited to respond but only the first 90 minutes of the forum were broadcast, and any statements he may have made were off-the-record.

Read more:   80th anniversary of Adriano Celentano to be held in Baku

Steffen Simon, the spokesperson for the German football federation which hosted the event, later stated that it was not their desire for a portion of the congress to be essentially subject to a media blackout, but added that this came at the request of participants who “did not want to discuss [these topics] in public.”

Major General Abdulaziz Abdullah Al Ansari, who is a senior Qatari official overseeing security issues for the tournament, said recently that same-sex couples would be welcome at the World Cup – but also stated that they would be wise to restrict public displays of their sexuality, such as displaying rainbow flags, to avoid the potential of being attacked by locals.

The country’s stance on alcohol, meanwhile, has also come under fire amid the thousands of tourists who will arrive in Qatar from numerous countries across the globe, with Qatari authorities pledging to temporarily loosen laws related to the consumption of alcohol so long as it is done in designated areas. (RT)