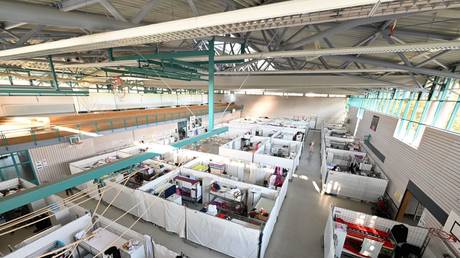 More than a million Ukrainian refugees are now living in Germany, according to the Interior Ministry FILE PHOTO: Refugees from Ukraine are housed in an emergency shelter, in Radolfzell, Baden-Wuerttemberg, Germany, on August 26, 2022. © Global Look Press / dpa / Felix Kaestle

German cities and towns have almost reached their accommodation capacities amid a massive influx of Ukrainian refugees, the heads of some two dozen municipalities in the southwestern state of Baden-Wurttemberg said in an open letter to the Federal Interior Minister Nancy Faeser, Suddeutsche Zeitung (SZ) reported this week.

Local authorities have exhausted all resources to aid new arrivals, the letter signed by 23 municipal leaders says, in a desperate plea for help. The officials said they were in an “extremely precarious situation” and are running out of space to resettle people.

The municipalities “have their backs against the wall,” the seven-page letter seen by SZ says, adding that they are “at a dangerous tipping point” and calling on federal authorities for support.

The number of Ukrainian refugees living in Germany surpassed the one million mark at the end of September, SZ noted, citing Interior Ministry data. The government now expects those numbers to rise higher over the winter, depending on the trajectory of the war in Ukraine.

The number of migrants arriving to Germany from Syria, Iraq, Afghanistan and Turkey via the so-called ‘Balkan Route’ is also on the rise, the authorities warn. 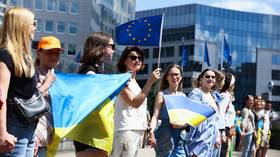 “We need more coordination between the federal and state governments when it comes to distributing those seeking protection,” Markus Lewe, the head of the Association of German Cities and a mayor of the western German city of Munster, told SZ. He called on federal and regional authorities to provide aid “as promised” and to “adjust their funding to the high number of refugees.”

The federal government, however, appears reluctant to offer help to the struggling municipalities. The issue of accommodation for refugees is something that the regional authorities should be responsible for, Federal Finance Minister Christian Lindner said, pointing to the “distribution of powers” between the federal and regional governments.

Interior Minister Faeser admitted the rising number of refugees “worries” her and announced a government meeting on the issue of refugees on October 11. According to SZ, federal authorities plan to allocate €2 billion ($1.96 billion) to the problem this year. Yet, that would hardly be enough, authorities warned.

“Federal states [located] close to the border will soon only be able to cope with the influx of refugees by providing temporary accommodation,” interior minister of the German eastern state of Saxony, Armin Schuster, said. (RT)