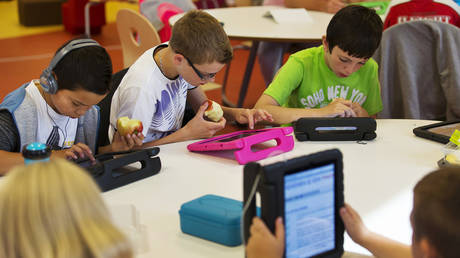 Britain’s GCHQ spy agency is running secretive “educational” programs in dozens of schools and disseminating propaganda to children as young as four years old, without the knowledge of parents, it’s been revealed.

The intelligence agency is running the programs in at least 40 schools with access to 22,000 children who are potentially being spied on, according to an investigation by Declassified UK.

According to the investigative website, GCHQ officers themselves are operating in at least one of the schools and parents of the pupils involved have not been made aware of the extent of the spy agency’s role in the so-called Cyber Schools Hub (CSH) programs also known as ‘CyberFirst’.

GCHQ publicly describes the programs as giving children between the ages of 11 and 17 the chance to experience “new ways of learning” in an “innovative cyber environment” and aims to use the school activities to help recruit kids for the cyber security industry.

Yet, Declassified revealed that the efforts have now expanded into primary schools where GCHQ has access to children as young as four years old – and that while the program literature states it is operational in 23 schools, it is actually running in nearly double that number – 10 of which are primary schools.

One of the primary school level “code clubs” is in fact staffed “entirely” by officers from GCHQ. The agency gains access to schools by offering to provide technology to local libraries and “recruitment teams” field enquiries from schools interested in being part of the program, the website said.

More disturbingly, the investigation revealed, local police worked with GCHQ on a “joint tag team event” to gain access to a student who had been reported to authorities as “very talented” by teachers who were worried he may be about to “cross the line” with his cyber activities – though there was no evidence that the child had done anything wrong.

The revelations about GCHQ’s activities in British schools are unsurprising considering US whistleblower Edward Snowden had previously revealed that one of the spy agency’s “top objectives” was to target children and create a “reporting service on radicalisation.”

Children are told that GCHQ, which conducts unlawful mass surveillance, according to the European Court of Human Rights, is the “heart of the nation’s security” system and has “saved countless lives.”

Asked what information was given to parents about the taxpayer-funded program, the National Cyber Security Centre (NCSC) told Declassified it had “no contact with parents” and that what teachers share with parents is up to them.

Declassified UK was rebuffed by both GCHQ and the schools themselves when trying to glean more information about the projects, with both citing “national security exemptions” in order to block freedom of information requests.

The spy agency is attempting to “drip-feed” children with messages aimed at recruiting them for the field over time, Jen Persson, director of Defend Digital Me, told Declassified. (RT)