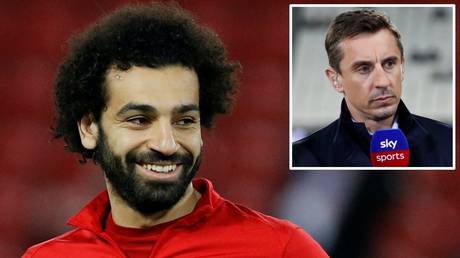 Salah has been the focal point of Liverpool’s resurgence as a major European force under Jurgen Klopp. His career in red has seen him claim an extraordinary 90 goals in just 140 appearances across all competitions in less than three seasons at Anfield, a goal scoring tally which has seen him become one of the hottest properties in world football.

Now it seems the Egyptian star could be a big-money transfer target for Real Madrid. Los Blancos emptied their coffers last summer to secure the services of Chelsea talisman Eden Hazard, though the Belgian’s impact has been restricted by injury, with an ankle problem set to keep him out of action until next season.

The rumored summer departure of Gareth Bale will leave space in the Real Madrid ranks for another ‘Galactico,’ and former United star and Sky Sports pundit Neville says Salah may well be the man to fill that space in Real’s lineup.

“I said 18 months ago I thought Mo Salah would leave Liverpool,” said Neville this week.

“I think it’s a little bit more simple in the sense of why Liverpool fans maybe don’t demonstrate that love for Salah, and it’s affinity and loyalty.

“I think there’s a feeling that he wants to go and play at Real Madrid, he’ll go to Barcelona, he’ll take the big move.

As millions of people languish in coronavirus-induced lockdowns, it seems the natural world is enjoying…

What if the IT hits the fan? Why IT know-how could hold the key to success at the ‘fully virtual’ 2020 NFL Draft

The number of confirmed infections of the novel coronavirus was reported to have exceeded 1.47…

There are new calls from Australia to release Julian Assange from prison over Covid-19 fears.…

Our Covid-19 numbers are best in Western Europe, don’t ruin it

Growing numbers of fake medicines linked to coronavirus are on sale in developing countries, the…