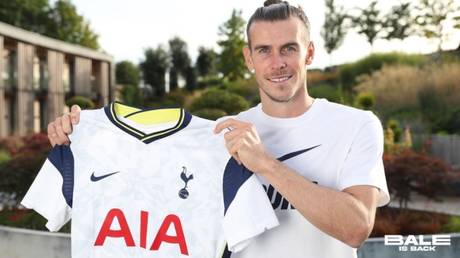 Madrid outcast Bale, 31, has completed the most high-profile transfer move of the new Premier League season by rejoining his former club on an initial season-long loan, although the chances of the Wales winger returning to his parent club seem scant given the nature of his departure.

Reports vary on how much Spurs will pay in fees and wages for the temporary capture of their former Player of the Year, although it is believed they will meet at least half of his £600,000-a-week ($775,000) wages.

The move follows a season in which Bale spent most of his time on the bench after failing to secure a lucrative switch to Chinese Super League club Jiangsu Suning last summer.

Fans and journalists used flight-tracking websites to follow club chairman Daniel Levy’s private jet as it took Bale and team-mate Sergio Reguilon to London Luton Airport from Spain on Friday morning after both had completed medicals ahead of their moves.

Reguilon was named La Liga’s best left-back last season while on loan at Sevilla and is reported to have joined on a five-year contract for at least the $23 million total that Everton offered for him in July.

✍️ We are delighted to announce the signing of Sergio Reguilón from Real Madrid!#HolaReguilón ⚪️ #COYSpic.twitter.com/XYBxS4w4Sd

The 23-year-old had been at Madrid since the age of eight and made his Spain debut in their 4-0 win at home to Ukraine earlier this month, including an assist to further underline the attacking qualities that had also alerted Manchester United and Chelsea to his talent.

Bale started his impressive international career more than 14 years ago and has had happier times with his country than his club in the last two years, captaining Wales to Nations League victories against Finland and Bulgaria earlier this month.

Those wins came on the back of an anonymous domestic season by his standards, playing just 14 times while contributing only two goals and two assists in major competitions for Madrid, as well as barely featuring in the Champions League.

Spurs coach Jose Mourinho had been tight-lipped about Bale’s arrival after watching his side edge past Lokomotiv Plovdiv 2-1 in Bulgaria after negotiations had concluded on Thursday.

Club record $69 million signing Tanguy Ndombele bundled a late winner in the Europa League qualifying match after Tottenham had gone a goal behind with less than 20 minutes remaining, adding to Mourinho’s concerns after a limp 1-0 loss at home to Everton in their Premier League opener on Sunday.

Tottenham’s early-season troubles have emphasized the potential need to add players of the caliber of Reguilon and Bale to their ranks as they attempt to re-establish themselves as challengers to the top four following a sixth-placed finish last season.

They were comprehensively ousted by Leipzig in the first knockout round of the Champions League last season, and the quality Bale has shown in Europe’s most prestigious competition could help them to reach it again.

Bale has won the Champions League more times in his career than any other trophy apart from the Welsh Footballer of the Year, helping Madrid to the European title in his debut season, including the winning goal in extra time of the final.

He also scored the spectacular first of a brace in the 2018 final after coming off the bench against Liverpool and registered his 100th goal for the club the following February, although he would have reached that total earlier had he not been troubled by calf, ankle, hamstring and muscle injuries during his time at the Bernabeu.

To all the Spurs fans, after 7 years, I’m back! #COYS@SpursOfficialhttps://t.co/NbAaUWefQPpic.twitter.com/zGk37PnQe9

A return to the kind of form he showed during his first spell at Spurs, after joining for around $6.4 million from Southampton in 2013, would be a significant boost for the Mourinho’s toiling side.

His tally of 26 goals in 44 appearances in his final season earned Bale the Premier League Player of the Year award before his $108 million move to Madrid broke the transfer record at the time.

Even a return to the double-figure totals of his two previous seasons, when he scored 23 goals overall, would ease their reliance on Harry Kane and Son Heung-min, the pair responsible for 42 of their 81 goals last season. (RT)