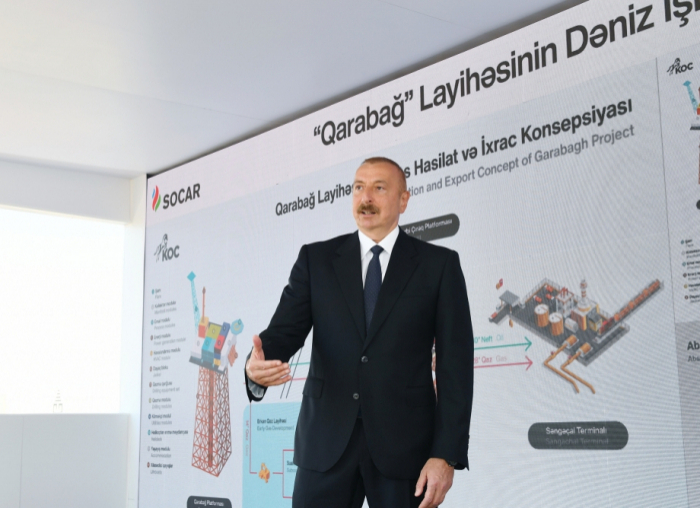 In the 1990s, an agreement on the distribution of shares was signed as a result of the implementation of Heydar Aliyev’s oil strategy. Three wells were drilled in this field in the 1990s. However, foreign partners did not believe in the effectiveness of the Garabagh field. Therefore, the contract was terminated and the Garabagh field was abandoned. However, our experts were confident about the great potential of this field and it was proved. The fourth well drilled this year was effective. So, the field was fully discovered, President Aliyev said.

President of Azerbaijan Ilham Aliyev made these remarks in his interview with Azerbaijan Television during a ceremony at Baku Deep Water Jackets Plant named after Heydar Aliyev to send a jacket of Garabakh field offshore, AzVison.az reports.

“I must remind that this is the first oil field discovered in Azerbaijan since independence. “Azeri”, “Chirag”, “Gunashli” fields were discovered during the Soviet period. “Shahdeniz” and “Absheron” fields are gas-condensate fields. As an oil field, this is the first field, and this facility is the largest, built in the Caspian Sea. Therefore, there is a lot to say about the importance of this project,” the head of the state noted.

“Certainly, it is the result of our successful policy. Although foreign oil companies have made big investments in Azerbaijan since 1994, the interest of foreign investors in Azerbaijan’s oil and gas industry has not decreased, but increased. I am confident that “Garabagh” and other fields will be exploited successfully and our country will make big profits,” President Aliyev also added.