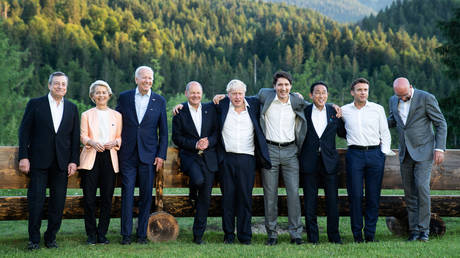 G7 nations are to invest as much as $600 billion into the infrastructure of less-prosperous nations around the world, with the US footing one third of the bill over the next five years. The announcement was made on Sunday in Germany, with the money supposed to rival the Chinese Belt and Road Initiative.

Flanked by other leaders of the G7 group, US President Joe Biden said Western countries were committing to “financing for quality, high-standard, sustainable infrastructure in developing and middle-income countries.” Without mentioning China by name, he said that what the G7 were doing was “fundamentally different because it’s grounded on our shared values”.

The US has long accused China of weaponizing its wealth by investing heavily into countries in Asia, Africa, and Latin America. The Trump administration claimed Beijing was pursuing “debt trap diplomacy” towards its borrowers, offering loans that the recipients ultimately can’t pay back and taking already built infrastructure as collateral.

China rejects the claim, saying that its global infrastructure investments, which are estimated at $2.5 trillion, benefits both itself and the target countries. Much of the money goes into things like roads and ports, giving China increased physical access to foreign resources and markets. (RT)