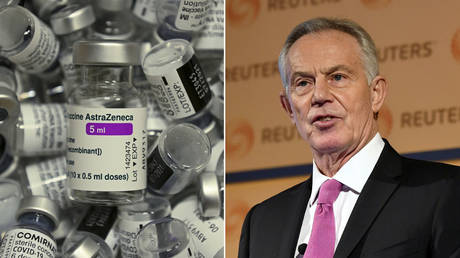 Tony Blair has some ideas on how to help out AstraZeneca in its PR crisis over blood clots. These include a supranational vaccine safety body and an instruction not to pause immunization to check possible side-effects.

A policy proposal published on Wednesday by the Tony Blair Institute for Global Change has lamented an increase in public hesitancy to take the Oxford/AstraZeneca vaccine against Covid-19, Vaxzevria. Several nations, including the UK, restricted its deployment to people over a certain age due to a possible link between the medicine and rare cases of potentially deadly blood clots in younger recipients.

The public reluctance “is completely wrong and unjustified” while the regulatory restrictions were based on “a narrow and unbalanced view of risk,” the former British prime minister wrote.

The policymakers in government need to grip this situation urgently and bring some coherence and logic to the issue of vaccine assessment. And do it globally.

The paper states that people who don’t want to get the jab are acting irrationally, possibly because they can’t compare the risk of side effects posed by different vaccines against Covid-19 between each other and other drugs. Britain, which has used both Vaxzevria and the vaccine developed by US-based giant Pfizer at large scale, is “in a unique position” to provide data for comparing health outcomes of people vaccinated by either of the two as well as those who didn’t get vaccinated at all.

Read more:   'Al-Ekhbariya':  President Ilham Aliyev reminded France of the crimes that it committed in Algeria

The AstraZeneca vaccine is based on a time-tested adenovirus vector platform while the one offered by Pfizer uses relatively new mRNA technology. The paper suggests that the bad publicity that the UK-developed product received over blood clots spills over to all vaccines of the type. The older vaccines happen to be cheaper and easier to store and transport, which would make them better candidates for “workhorse” vaccines for global immunization, if efficacy and safety are set aside.

British authorities need to publish more data from its vaccination campaign to allow a convincing comparison of the two vaccines, the institute suggested. In the meantime, some indication of how AstraZeneca and Pfizer measure against each other can be glimpsed from the Yellow Card Scheme, a UK government instrument for self-reporting various medical incidents, including suspected side effects of vaccines against Covid-19.

This dataset shows 1.49 reported cases and 0.10 reported deaths per 100,000 doses among Vaxzevria recipients, compared to 4.07 cases and 0.26 deaths respectively for those who got inoculated with the Pfizer vaccine. The report says the figures may be “incomplete and not accounting for age,” but they show that the AstraZeneca jab “is far from the poorer cousin of Pfizer.” (RT)

In the evening of May 17, 2021, National Security Adviser to the President of the…