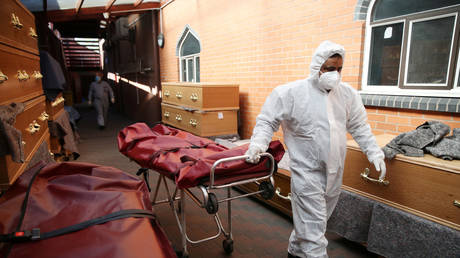 A worker wearing protective equipment is seen by coffins at a temporary morgue set up at a Mosque, Birmingham, England © REUTERS/Carl Recine

The UK has suffered the highest rate of excess deaths per million in the world among countries with comparable data during the Covid-19 pandemic, provoking outrage from Britons still reeling from the Cummings scandal.

Data collected by the Financial Times shows that the UK has registered 59,537 more deaths than usual since the week ending March 20 – just before the start of the lockdown. It equates to 891 people per million killed directly or indirectly by the deadly virus – a higher death rate than any other country in the world with the same quality of data.

The figures also show that when it comes to the absolute number of excess deaths the UK has recorded the highest in Europe and second only to the US in global terms.

The UK has suffered 60,000 excess deaths, directly or indirectly linked to Coronavirus, according to official figures. Only the much larger US has had more. UK has had the highest global excess death rate (per million)And only Peru has had a higher increase in deaths 2/ pic.twitter.com/bYQDuutpIA

The shocking statistics come as Britain is still recovering from the fallout of the Dominic Cummings saga. More than 60 Tory MPs have reportedly defied PM Boris Johnson’s call to “move on” from the scandal surrounding his special adviser, to speak out against him – with 43 insisting that Cummings must resign or be sacked for flouting a number of lockdown rules. (RT)