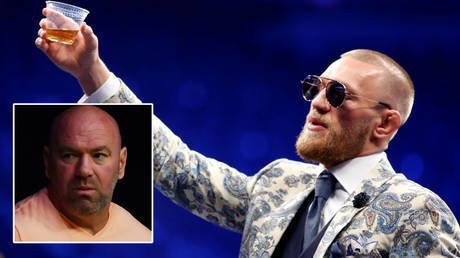 Conor McGregor has slammed Dana White’s claim that he broke a code of honor by revealing private messages that he alleged the pair had exchanged, insisting that the UFC boss had thwarted his plan to take four MMA fights in 2020.

McGregor appeared to suggest that he had been ready to fight again shortly after his rapid UFC win over Donald Cerrone in January, which heralded an ongoing period of inactivity for the former lightweight champion amid the enforced uncertainty of the coronavirus pandemic.

He engaged in a war of words with White over a series of screenshots of messages that McGregor claimed he had exchanged with the UFC president, adding that UFC welterweight Diego Sanchez, who beat Jake Matthews at UFC 253 on ‘Fight Island’ on Saturday, should be one of his planned opponents.

“The code was broken when you lied about me turning down fights, mate,” McGregor wrote on Twitter after White accused him of disloyalty following Sanchez’s win.

Code was broke when you lied about me turning down fights mate. I said Justin in May and you went and said I did not want to fight. It’s not about Diego. Diego was a filler to get more fights in. Also you have been involved in Manny talks the legal letters are there.Stop lying.

I am still interested in a fight with you somewhere down the line Diego Sanchez. A true warrior and pioneer of this sport. It would be my honour! Some journalists and promoters and their lack of respect for what the fighters put into this game make me sick. Things must change!

“I said Justin [Gaethje] in May and you went and said I did not want to fight. It’s not about Diego. Diego was a filler to get more fights in.”

McGregor had earlier claimed on Instagram that he would “rather fight MMA” than switch back to boxing for a fight against former champion Manny Pacquiao.

White said McGregor had acted in the “dirtiest” way by revealing their messages and said he had no knowledge of arrangements for his anticipated meeting with Pacquiao.

“You have been involved in Manny talks – the legal letters are there,” retaliated McGregor. “Stop lying.”

He added to Sanchez: “I am still interested in a fight with you somewhere down the line. A true warrior and pioneer of this sport. It would be my honor.

Also on rt.com ‘One of the DIRTIEST things you can do’: UFC boss Dana White fumes after Conor McGregor leaks message exchanges (VIDEO)

“Some journalists and promoters and their lack of respect for what the fighters put into this game make me sick. Things must change.”

Earlier this year, McGregor accused former foe and current lightweight champion Khabib Nurmagomedov of “scurrying like a rat” as his scheduled fight with Tony Ferguson was canceled due to the pandemic in March, then produced a succession of cryptic tweets that seemed to declare he was ready to return, namechecking the likes of Anderson Silva before declaring his retirement in June.

White has said that the lucrative financial potential of a McGregor fight under his promotion would shrink without fans allowed at events, admitting that one of his most commercially successful stars would not appear in the octagon in 2020.

McGregor took to Instagram hours before his potshot at White on Twitter, talking up his status and taking a swipe at Bob Chapek, the chief executive of The Walt Disney Company which owns UFC broadcasting partner ESPN.

Writing shortly after representatives of boxing great Pacquiao confirmed that he had agreed to switch disciplines again to take on the Filipino next year, he said: “Not sure why I’ve been held back like this.

🗣️ ‘What Conor McGregor did was the lowest thing you can do’@danawhite says @TheNotoriousMMA broke the ‘man code’ pic.twitter.com/j9jrYs6nrD

“It’s borderline criminal at this stage. The biggest number generator in the game asking for four fights since February this year.”

McGregor alleged that he had been “left on seen” – a reference to messaging services that allow users to see when recipients have read their messages – and confessed that the situation was playing on his mind.

“It’s pretty f*cked up when I keep thinking of it,” he blasted. “I’ve been right here this whole time.

“Bob Chapek, do you copy? I repeat, Bob Chapek – do you copy? Anyways, boxing it is for now and I’m up for this [fight with Pacquiao].”

While UFC fights have been taking place on Yas Island in Abu Dhabi since July, McGregor had appeared to embark on a public relations campaign to prove that he was firmly retired following his announcement that he would no longer compete on Twitter.

Here’s the finish of that exchange. Pre covid. Pre retirement.Never turned down offer of Tony as was suggested at the time. I stated months in advance (early February) that I was not interested in being an alternate for two consistent pullouts. Pushed for my own scheduled bouts pic.twitter.com/jXQD2dTWrL

Hey guys I’ve decided to retire from fighting.Thank you all for the amazing memories! What a ride it’s been!Here is a picture of myself and my mother in Las Vegas post one of my World title wins!Pick the home of your dreams Mags I love you!Whatever you desire it’s yours ❤️ pic.twitter.com/Dh4ijsZacZ

He has since pictured himself drinking his personal brand of whiskey, lazing on a beach while having a mysterious rolled up cigarette handed to him and sunbathing on a boat as he showed off the high life to his millions of fans, although he interspersed his portraits by filming sessions on a punchbag and promoting a marathon fitness project alongside a role as an ambassador for cycling showpiece the Tour de France.

Many fans and commentators speculated that McGregor had feigned his withdrawal from the sport in order to command a higher payday for his return, having “retired” twice before.

He admitted that he had been drinking whiskey during his latest outburst, which came after he reminisced about his first boxing match, in which he fought former Pacquiao rival Floyd Mayweather.

White was involved in that event but emphasized that he had “no idea” about the proposed fight with Pacquiao in the Middle East.

“Listen, you guys have been asking me about Conor McGregor forever,” he wearily responded.