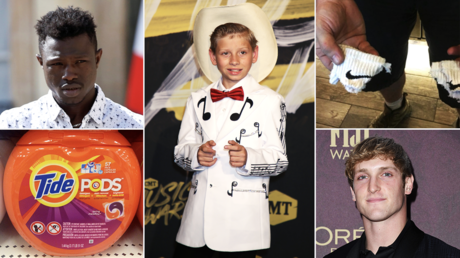 As 2018 draws to a close, RT takes a look back at the weird and wonderful world of viral news, from the death-defying heroism to rage-inducing moments that grabbed our attention. Here are the viral winners and losers of 2018.

Mamoudou Gassaman’s heroic climb up the side of a Paris building to rescue a trapped four-year-old places him firmly in the viral winners’ camp.

The immigrant from Mali didn’t hesitate when he saw a small toddler hanging precariously off the side of a balcony in May, leaping into action and scaling the building’s facade to reach the boy as onlookers watched in shock.

Gassaman’s Spider-man moment saw him become a viral sensation, and a petition was soon started to grant the illegal immigrant citizenship in recognition of his heroism. He soon met with French President Emmanuel Macron and was granted French citizenship and a job.

Ryan is one of the popular ‘unboxing’ Youtubers who enthrall viewers by opening packaging on products (in his case toys) and then explaining their features. He earned about $21 million from advertising revenue alone, with the rest of his earnings generated from sponsored videos.

The chances of a humble bovine reaching viral stardom are few, especially for something as seemingly innocuous as height but, for Australian steer Knickers, his towering stance was so great it saw him become a global viral sensation – and saved him from the slaughterhouse.

An enormous steer in Western Australia is making headlines. At 194cm ‘Knickers’ is the largest in his category in Australia. Story: https://t.co/ZI472MBUU4#7Newspic.twitter.com/MDEMwEbD8R

Knickers was pictured looming behind a herd of cattle on farmer Geoff Pearson’s farm in Western Australia. The steer is an unbelievable six feet four inches and appeared to dwarf his more vertically challenged counterparts.

A pair of a attention-seeking Pelican wreaked havoc at a graduation ceremony at Pepperdine University in California in May.

The rogue birds swept ominously through the crowds at the graduation, causing the ceremony to grind to a halt as security struggled with how best to remove them. One of the pelicans even sat among the audience, flapping its large wings to the shock of some attendees.

When 11 year-old Mason Ramsey opened his mouth to blast out some yodeling in a Walmart aisle one day in April, he had no idea it would bring him superstardom.

His rendition of ‘Lovesick Blues’ went viral and Ramsey wound up performing at Coachella – and even landed himself a record deal.

Top YouTuber Logan Paul was trending for all the wrong reasons in January when he shared a video boasting that he had found a dead body while walking through Japan’s Aokigahara forest, a known suicide black spot. The video racked up over six million views in 24 hours that included a tsunami of hate directed at his stunt, described as sick and opportunistic.

Read more:   It's more than just an opioid crisis, polydrug use is poisoning Americans

Paul’s subsequent apologies fell flat and he went from one of the most popular YouTubers to one of the most hated. Despite this, his loyal fans continue to defend and support him.

The trend got so bad that the detergent’s manufacturer brought out an ad urging people not to eat it, and YouTube removed videos of people attempting it.

In an ominous reflection of race relations in the US, 2018 saw a worrying epidemic of busybody Americans calling the police on African Americans going about their business.