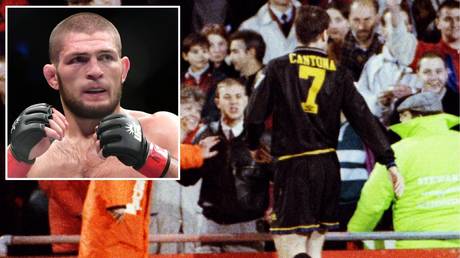 As NFL fans react with shock at the incident involving Myles Garrett and Mason Rudolph on Thursday night, RT Sport takes a look at 10 unforgettable moments when sports stars succumbed to the red mist.

Eric Cantona’s indelible impact on the Premier League is forever immortalized by the night at Selhurst Park when the striker showed the incendiary personality of the poet he has since become.

Four minutes after the break in a match that would finish 1-1, Crystal Palace defender Richard Shaw’s close marking of the Manchester United magician caused Cantona to lose his cool in violent fashion and lash out at the defender in close quarters to the assistant referee, resulting in a red card.

As he strutted towards the tunnel, Cantona was offered choice words by a 20-year-old Palace fan who had raced down a stand, and his reaction – described by one newspaper as “nitro-glycerine in human form” – was to leap feet-first across a hoarding towards his taunting adversary.

Cantona’s leap was labeled a kung-fu move, but in truth it was too primally unconstrained to honor the discipline. He received a nine-month ban from the sport and 120 hours of community service.

If Nate Diaz’s response to Conor McGregor’s sharp tongue ahead of UFC 202 – launching a plastic bottle at his rival as he angrily exited a press conference – was intended as a petty parting shot, it provoked a rippling response from the sport’s fiercest figure.

“You’ll do nothin’,” McGregor’s initial repeated barb into the microphone, has become a fixture of memes and mockery, but the former champion earned the reaction he really wanted in the form of a harmlessly lobbed receptacle.

Apparently incensed by the chuck, he leaped to his feet, grabbed drinks from the press table and began furiously launching them into the darkness, where Diaz and his mob were goading his team in kind.

One of the impromptu weapons was a Monster energy can which was reported to have struck a young viewer on its flight towards team Diaz.

“He shouldn’t have been throwing cans like that,” said featherweight Chris Avila, who revealed the identity of the luckless can victim.

Brazilian Formula 1 great Ayrton Senna entered the 1990 Japanese Grand Prix in pole position, knowing that the only man who could deny him the World Championship was familiar foe Alain Prost, who had beaten him to the title the previous season.

Starting the day seven points ahead of Ferrari’s Prost, Senna was ruthless and reckless in knocking the Frenchman off the circuit at the first corner in a crash at around 130mph that savaged the right wing of his McLaren Honda before he had even achieved impact.

Understandably, Prost was disgusted by the precarious ploy, and the danger involved was underlined when Formula 3000 driver Hitoshi Ogawa was killed in a crash on the same corner two years later.

If the water bottle wobbly at UFC 202 was a warm-up, McGregor’s violent attack on a minibus in Brooklyn – which contained future opponent Khabib Nurmagomedov and several other fighters – was an outbreak of unbridled menace.

Following a hotel confrontation involving Nurmagomedov and McGregor teammate Artem Lobov, McGregor and his team hopped on a private plane to New York and attempted to exact revenge by attacking the bus containing the Russian star.

Steel dollies, garbage cans and railings were a few of the weapons said to have been rained on the buses in the loading docks at the Barclays Centre, where McGregor and his cronies had stormed the innards and reached the mini-convoy.

All of which unwittingly gave Nurmagomedov ample motivation for his eventual encounter in the Octagon with McGregor, scoring a shock fourth-round win at UFC 229 to usurp the lightweight champion and secure his position as a name not to be messed with. More on that later.

Nick Kyrgios hurling a chair across a court at the Italian Open – May 16, 2019

Where do we start with Nick Kyrgios? Let’s take a recent flashpoint in the Australian showman’s histrionic history, when he reacted to being docked a game for swearing in typically reasonable fashion at the Italian Open, hurling a chair aside before packing his bag, marching off and defaulting the match.

He accrued more fines for a string of misdemeanors at Queen’s in London the following month, including lampooning an official’s headwear, but those incidents were only the latest in a litany of incidents that have been equal parts distasteful, disturbing and entertaining.

One of the earliest, when he made abusive remarks to Stan Wawrinka about new girlfriend and fellow pro Donna Vekic in 2015, left the multiple Grand Slam winner publicly appalled by remarks he called “disrespectful in a way I could never even imagine.”

Since then, Kyrgios has stropped out of Wimbledon, faced sanctions for apparently throwing a match, been at the center of a BBC apology for seeming to simulate a sex act with a bottle and annoyed Rafael Nadal by serving underhand – although Judy Murray praised that unorthodox tactic as “genius”.

The underarm serve. 💕 The whole point of tennis competition is to disrupt ur opponents game by applying pressure through changing the speed, spin, direction, depth or height of the ball. And that includes the serve. Kyrgios is a genius. I’m surprised more players don’t do it. pic.twitter.com/lBfI8XM7MN

Heavyweight Holyfield had inflicted the first defeat of Tyson’s fearsome career since a wake-up loss to Buster Douglas six years earlier, so it was forgivable that the rematch of their 1996 contest, in Nevada in 1997, was a source of anger for the dethroned WBA champion.

Less forgivable – and comprehensible – was Tyson’s increasing tendency to target Holyfield’s head and ears with his teeth as he grappled to regain his crown in the early stages of their second fight.

The fight has been viewed in a funnier light in the years that have followed, but it’s hard to forget how appallingly gruesome the animalistic assault seemed at the time, with Tyson gobbing part of Holyfield’s lobe onto the canvas before it was carried away in a bag by officials.

Holyfield said a prayer for his disqualified opponent in his dressing room, and Tyson has offered a variety of explanations since that night, which caused his boxing license to be revoked in a move that kept him out of the ring for 18 months.

One of the abiding memories of the 2014 World Cup group stages came in the moments after a bizarre incident in which Luis Suarez, Uruguay’s mercurial striker and playmaker who was about to join Barcelona from Liverpool, appeared to bite Italy’s Giorgio Chiellini.

Most fans squinted at their screens in an attempt to deduce whether their eyes were deceiving them at the sight of an inexplicable act that was later shown to have left visible teeth marks on the shoulder area of the Juventus defender.

Suarez received a retrospective ban from even entering football stadiums until October, with a panel rejecting his defense and finding him guilty after viewing the collision from 34 different camera angles.

Many were unaware that Suarez had first been banned for biting while at Ajax in 2010. A year later, he was found guilty by the English FA of racially abusing Patrice Evra, and he also sat out ten matches for biting Chelsea’s Branislav Ivanovic while with Liverpool in 2013.