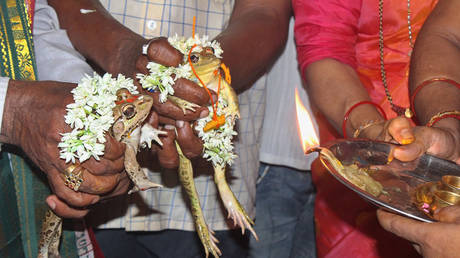 Two frogs were wedded in July to appease the Hindu god of rains, Lord Indra, and bring favor, and rainfall, to drought-stricken Bhopal. The hoppily married couple have now been divorced after the area experienced intense flooding.

Since the frogs’ wedding, Madhya Pradesh has been inundated with rain, roughly 26 percent more than normal, causing flooding across the state, including record-breaking rainfall in Bhopal on Sunday where parts experienced 48mm in less than 24 hours. (RT)