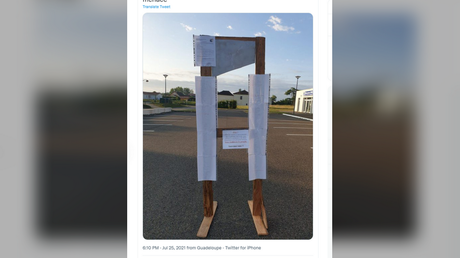 A man in France has been charged with threatening politicians by attaching their names to makeshift guillotines. He claimed it was in protest at the country’s Covid-19 restrictions.

A 50-year-old man from the southwestern Landes region will be tried in October for making “death threats against public officials,” a local prosecutor’s office said.

The suspect, who was identified through CCTV footage and detained on Thursday, set up dummy guillotines in the towns of Saint-Sever, Samadet, and Geaune last week. Sheets of paper with the names of 382 mayors were attached to the devices.

The listed officials had all put their names to a recent opinion piece in the Le Journal du Dimanche newspaper, in which they had “saluted the courage” of the decisions made by President Emmanuel Macron, including the introduction of a health pass.

The suspect was quoted by the AFP news agency as saying the guillotines were made of wood and cardboard, and not intended to be perceived as a death threat. He said he wanted to “alert the mayors to the violations of fundamental freedoms by the government’s decisions” during the pandemic.

Nevertheless, Pascale Requenna, the mayor of Hagetmau and a regional councilor, told the media she had been frightened by the installations and, along with Samadet Mayor Bernard Tastet, had filed a police complaint. (RT)