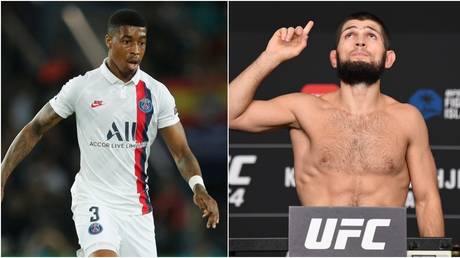 PSG star Kimpembe has defended himself for 'liking' the post about Macron by UFC champion Khabib. © Reuters / Zuffa LLC

Paris Saint-Germain defender Presnel Kimpembe has defended himself after he came under fire for “liking” Khabib Nurmagomedov’s Instagram post in which he was highly critical of French president Emmanuel Macron.

Nurmagomedov, a devout Muslim, has issued several posts amid a row over religion and free speech after two terrorist attacks in France, including one in which he posted a picture of Macron with a boot print across his face.

“May the Almighty disfigure the face of this scum and all his followers, who, under the slogan of freedom of speech, offend the feelings of more than one and a half billion Muslim believers. May the Almighty humiliate them in this life, and in the next. Allah is quick in calculation and you will see it,” wrote the UFC lightweight champion.

In another post, the Russian said “may Allah unleash His punishment on everyone who encroaches on the honor of [the Prophet Muhammad].”

Read more:   Azerbaijan to put an end to Armenia's illegal occupation of its lands, official says

Also on rt.com ‘Enemies of Islam’: Khabib lashes out again in freedom of speech row after attacking French leader Macron

The footballer was reportedly one of several French players to “like” the latter message, along with Karim Benzema, Tiemoue Bakayoko, Ricardo Faty and Mamadou Sakho, as well as Barcelona midfielder Miralem Pjanic and former Manchester United and Real Madrid star David Beckham.

Kimpembe, who has been criticized for doing so, issued a tweet on Saturday in which he said he did not want to be drawn into politics and suggested there may also have been a linguistic misunderstanding.

“I play sports, not politics,” he said. “I don’t speak Russian either. I strongly condemn terrorism, all forms of violence without reservation, and all nauseating attempts at manipulation.”

Nurmagomedov hit out at Macron after he defended the right to publish cartoons of the Prophet Muhammad – something strictly forbidden in Islamic tradition – in the wake of the beheading of teacher Samuel Paty in Paris earlier in October.

Paty had shown cartoons of the Prophet Muhammad to his students during a class on freedom of speech.

On Thursday, three people were killed in a stabbing spree in Nice which Macron – who has raised the country’s terror alert to ‘maximum’ – described as an ‘Islamist terrorist attack.’

In September, French satirical magazine Charlie Hebdo republished cartoons of the Prophet Muhammad that caused them to be targeted in a terrorist attack in 2015 that left 12 people dead.

Kimpembe, 25, came through the youth ranks at PSG and has since made 149 appearances for the club, winning four Ligue 1 titles, Coupes de France and Coupes de la Ligue apiece.

The center-back has 11 appearances for the French national team, one of which came during their successful 2018 FIFA World Cup campaign in Russia. (RT)