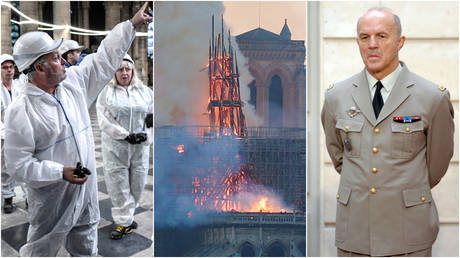 Tensions are high in the reconstruction project for France’s Notre Dame cathedral after an Army general appointed by President Emmanuel Macron has told an architect fighting for the original spire design to “shut his mouth.”

It’s not a fight you expect to see very often, but the reconstruction of the fire-gutted Notre Dame cathedral has led to a showdown between the chief architect and General Jean-Louis Georgelin, appointed by French President Emmanuel Macron to pilot the restoration project.

Chief architect Philippe Villeneuve has been faced with an ambitious five-year deadline to restore the famed cathedral’s interior, roof, and the iconic spire completely destroyed in the April blaze.

Also on rt.com No, we don’t want Notre Dame turned into another secular solar-powered eco-garden

But now it appears Georgelin and Macron have run into trouble with Villeneuve vision of the spire’s look – which for him is staying as true as possible to the original design. Georgelin and Macron both want to redesign the spire to give it a more “contemporary” look, and their side has an argument that the 19th-century addition is in itself a redesign of the lost 13th-century feature. Villeneuve, meanwhile, has made it clear that if he is to be the architect on the project, then it must be identical to what stood before. This is also the only way to meet the five-year deadline, he adds.

A public argument about the restoration broke out late Wednesday at the French National Assembly, and Georgelin did not mince words there. Asked about Villeneuve point of view, the general said: “As for the chief architect, I have already explained that he should shut his mouth.” He added that all involved with the project need to “move ahead in wisdom so that we can serenely make the best choice for Notre Dame, for Paris, for the world.” (RT)