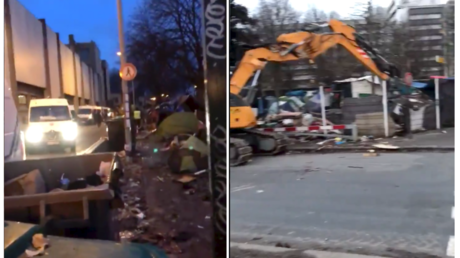 More than 1,400 people were moved from an outdoor migrant camp in northern Paris and relocated to temporary accommodation amid a government clampdown on illegal migration.

The operation in the city’s 19th arrondissement began at 5:30am on Tuesday as police descended upon the labyrinth of tents and shacks at the Porte d’Aubervilliers. Some 249 people in families and 1,187 single men were taken to temporary accommodation in nearby gymnasiums or to 17 reception centers in Ile-de-France.

Eyewitness video from the scene shows the extent of the evacuations, as well as the police efforts to ensure that another camp doesn’t simply spring back up in its place once authorities leave.

“I’m relieved by this operation because it was getting hard to bear the cold,” Yssouf, a 29-year-old man from Côte d’Ivoire, told AFP. “I’m happy to be offered housing, even though I know it will not last long. It’s better than nothing.” (RT)